There is this famous quote attributed to Winston Churchill: “You can always count on Americans to do the right thing – after they’ve tried everything else.”

I was reminded of this quote on Sunday, while I watched Fareed Zakaria on CNN discussing the situation in the Middle East.

However, I also feel compelled to add another sentence to the famous quote: “Meanwhile, you realize that they’ve known clearly what the right thing was all along.” Even George W. Bush, presumed to be intellectually challenged by his detractors. 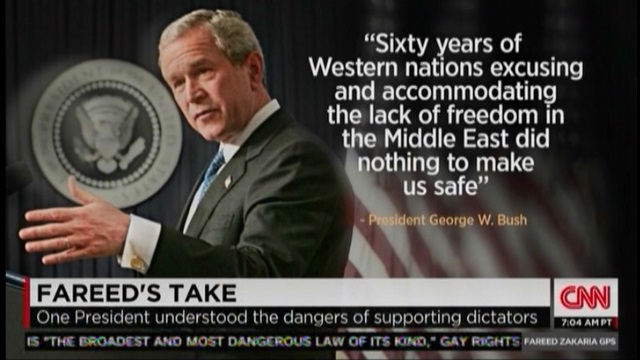 After all, if George W. Bush of all people had such clarity concerning the Middle East, why is the United States of America still meddling and still supporting despotic regimes?

Along with, I am afraid to say, Canada. Our warmongering prime minister just managed to get authorization from Parliament to extend Canada’s anti-ISIS mission to Syria. But who exactly are we fight for there? Syria’s murderous secular dictator? Or Iran’s murderous Shiite proxies? And why is this Canada’s fight anyway?