I did not believe that I could become more disenchanted with Stephen Harper’s government, but I was wrong.

Tougher sentences? Is this really the biggest problem facing Canada? Especially considering that violent crime in this country has been consistently on the decline for the past four decades or more?

As for Bill C-51, the government’s proposed anti-terrorism bill, it is taking this country to a whole new territory by turning our security intelligence service into a de facto secret police, among other things. 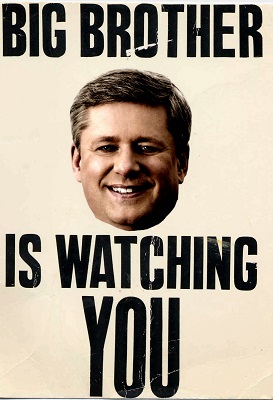 Is this really Mr. Harper’s vision of Canada? A petty, vindictive police state? Or is this just cynical politicking in an election year? If so, are Canadians truly this easily frightened into giving up basic liberties for the illusion of security?

I cannot even begin to describe how incredibly disappointed I, a one-time conservative voter, am with Mr. Harper and his Conservative Party.

Sadly, my disappointment extends also to Mr. Trudeau and his Liberal Party’s cowardly decision to support C-51. It is incomprehensible, to be honest, and for the first time in my life, it makes me seriously contemplate voting for the NDP. (Unfortunately, if too many people think like I do, the vote on the left will again be split, and Harper stands a chance to remain in power for another five years. May the powers that be and the Giant Spaghetti Monster have mercy on us if that happens.)

What I would really like to vote for, however, is a conservative government that eschews ideology in favor of fact-based governance. One that does not resort to low-brow populism. One that does not use fear to justify legislation that undermines fundamental rights. One that pursues an agenda of international cooperation, not narrow-minded petty vindictiveness. We used to have conservatives like that in this country. It’s time for them to wake up and return.