Five days ago, I was sitting on an Emirates Airlines flight from Dubai to Budapest.

Our flight took an unusual route. Normally (well, at least within my limited experience) such flights take a route north of Iraq, flying over Iranian airspace towards Turkey. Not this time: We flew across the Saudi desert instead, then turned north over the Sinai peninsula before entering Turkish airspace and turning northwest again. I was wondering about that kink in our trajectory: was it weather or perhaps some airspace over the Mediterranean was closed for military reasons? As a service to business class customers, Emirates provides a limo service to the destination of your choice on arrival. I was wondering how I would find the limo pick-up location, but it was easier than I thought: the chauffeur was waiting for me at the customs exit, holding up a sign bearing my name. During the journey to my hotel, he told me about his son who wishes to become a particle physicist at CERN. So for a while, we were discussing the Higgs boson and teraelectronvolts, instead of more customary topics, like Hungarian politics.

I rented a car in Budapest, for my mother and I to take a short trip to southern Hungary, to visit my mother-in-law. As we had the car for a whole weekend, on Sunday we decided to take another small trip, this time to the north of Budapest, the small but historical city of Visegrád. At the time, this building served as a resort owned by the Hungarian Industrial Association. As a member of a crafts artisan cooperative, my mother was entitled to vacation in this place, which we did in the spring of 1974. This is how she came to meet my stepfather who at the time was the manager of this facility. To make a long story short, we lived in the manager’s apartment for several years, while my parents built a new house in the same town. I have fond memories of this place.

Today, it serves as a home for the elderly. It seems to be well taken care of. Much to my surprise, one of its terraces appears to have been converted into a chicken coop, complete with a rather loud rooster:

Other than these two excursions and a brief visit to a 91-year old friend who recently had a serious health crisis, I spent most of my time at my parents’ place, a small apartment on the Buda side, nearly filled by a giant dog and his favorite toy: My parents are very fond of this animal. He is nice, but I remain committed to cats. They are quieter, smell nicer, and require a whole lot less maintenance.

And all too soon, I was on another airplane, flying “business class” on British Airways to London. I had to put “business class” in quotation marks, as there was ridiculously little legroom on this middle-aged A320: At least, the middle seats were converted into an extra tray instead. 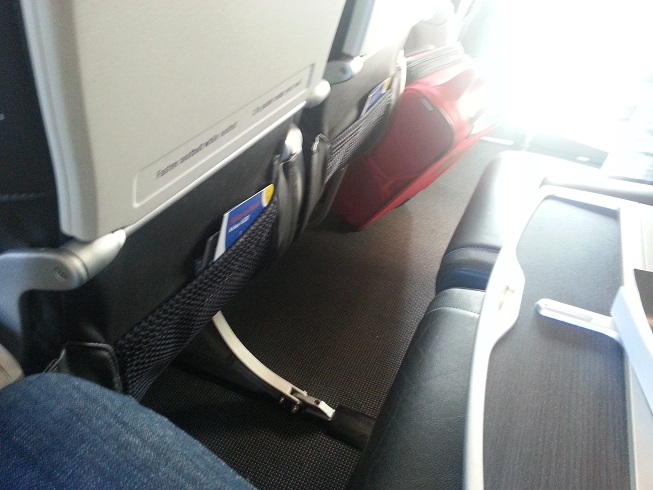 And the flight left Budapest nearly an hour late. The reason? The air crew arrived in Budapest late the previous night, and they had to have their mandatory rest. This presented a potentially serious problem for me: the possibility that I would miss my connecting flight, which, to make things worse, was purchased separately. I probably broke some records at Heathrow Airport as I managed to make it from the arrival gate in Terminal 3 to the Terminal 2 departure gate in only 32 minutes, which included a bus ride between terminals and going through security. I made it with about 10 minutes to spare. I checked and I was told that my suitcase made it, too.

I have to say, while I like both Air Canada and British Airways, their service doesn’t even come close to the quality of service I enjoyed on Emirates or Etihad. And I am not just referring to legroom or the age of the aircraft (the Emirates flight to Budapest was a really aged A330 and the seats, while a great deal more comfortable than these British Airways seats, were nonetheless a little cramped) but also the attentiveness of the staff on board.

Still, the flight was pleasant (except for some rather severe turbulence near the southern trip of Greenland), and some eight hours later, I was back in snowy Ottawa. The land of deep freeze, where the Rideau Canal is breaking all kinds of records, having been open for well over 50 consecutive days already.