There was a time when I thought I would be a lifetime (Progressive) Conservative voter. I did not abandon my political principles even when most voters fled the once mighty PC party, reducing its representation to a mere two seats in Parliament. 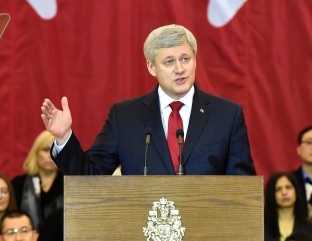 How times have changed.

Let me tell you why I am not going to vote for you or your Party this year, and why I hope that you will be defeated in the upcoming election.

No, I am not going to say anything nasty. I do not subscribe to the idea that those who think differently about politics must be declared enemies of the public. Let us leave American-style political hatemongering and demonization to, well, Americans.

I am hoping that you will be defeated because I strongly disagree with your policies. I believe I can disagree with you even as I respect you, both as a person and as a politician (not to mention, as a fellow cat lover.)

I disagree with your economic policies. Balancing the budget is a good idea… during good economic times. When the economy is in a rut, especially now when Canada is suffering more than it should from the impact of falling oil prices, government’s top priority should be re-igniting the economy and the creation of jobs. Not balancing budgets, especially not at a time when interest rates are at a historic low, and the debt-to-GDP ratio of the country is healthy.

I disagree with your response to security challenges. No, I do not underestimate the jihadi threat even to a peaceful country like Canada. But even as you proclaim that the jihadis are enemies of freedom, it’s your policies that represent a direct attack on our freedoms. You want to curtail our freedom of speech, when said speech amounts, in someone’s opinion, to “promoting terrorism”. You want to censor the Internet when it comes to content that is seen terrorist propaganda. You want to grant enhanced powers to agencies that already engage in alarmingly intrusive activities when it comes to our privacy. Yet the material impact of these measures is dubious. You also championed a regime of two-tier citizenship. So your response, which may either by misguided or (if done for the reasons of election-year politics) cynically calculating, amounts to a greater threat to our freedoms and basic rights than jihadi terrorism.

I disagree with your populism, especially when it comes to science. I once (long before you became Prime Minister) wrote a concerned letter to the Chief Statistician, expressing my alarm about the extent to which private details may be revealed in personally identifiable form in the Long Form Census. But even I did not expect you to abolish this essential data-gathering tool. By doing so, you caused irreparable damage to Canada’s statistical data collection. Your populism trumped reason in other areas, too: federal scientists in Canada are muzzled like they have never been before. Your ban on travel from Ebola countries was done contrary to the best scientific advice.

I also disagree with your policy on crime. I am sure this “tough on crime” agenda earns political brownie points in important constituencies, but hey, you can do better than that. You can be better than that. Canada does not need a tough-on-crime policy when crime rates have been consistently falling for the past several decades. We need to have fewer people in prison, not more. Archaic punishments like solitary confinement should be abolished, if possible.

I could go on about other topics, including the sad state of the CBC, the future of Canada Post and the demise of home mail delivery, the Experimental Lakes, the closure of our embassy in Tehran, your ridiculous anti-prostitution bill, and more. Instead, let me just repeat a question well known from a past US election campaign: Are we better off than we were nine years ago, when you first came to power?

I say no. While Canada’s economy weathered the storm of the financial crisis, that was largely a result of the policies of preceding governments. Since then, Canada’s economy never fully recovered and is lagging badly behind that of the United States. Our country is smaller-minded, pettier than it was nine years ago. Our international reputation is damaged.

In short, Mr. Harper, I believe that despite your best intentions, you have been steering the country in the wrong direction. It is time to go. We have given you ample opportunity to show us what you can do, and you have not lived up to our expectations. It is time to give an opportunity to someone else, before your misguided governance results in more damage.

However, if and when that happens, I will say goodbye by thanking you for your service, and I will hope others will do the same. Hate has no place in politics, and one of the best things Canada can do to improve its reputation is to show that it is possible, even in this 21st century, to be civil in politics.