In response to the Paris attacks, many supposedly responsible American politicians point at the US visa waiver regime as a potential threat to American security. “We cannot let these Europeans enter the country with no scrutiny,” they scream at the top of their lungs to an ignorant electorate that has been taught to see terrorist shadows everywhere.

Meanwhile, talking heads on American TV also talk about how dangerous Europe has become, because of its open internal borders. I wonder if they would also advocate shutting down interstate borders within the United States. After all, there is no such thing as too much safety! And while they are at it, perhaps they can also institute random police identity checks, a mandatory national ID card system, and perhaps mandate that everyone must have a permanent address and a place of work.

Oh wait, this has already been tried before. It was called communism.

And just in case anyone had the impression that followers of Mohammed are the only ones who can go berserk, here is the front page of an ultra-orthodox Israeli newspaper, showing the row of world leaders marching in Paris on Sunday: 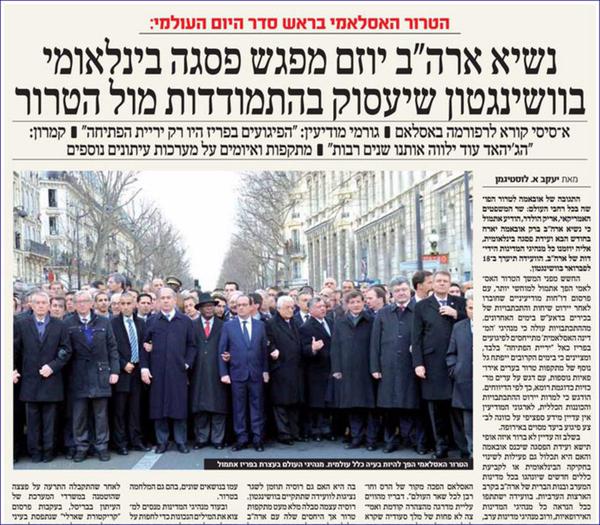 There is only one problem: they photoshopped out all the women. After all, an ultra-Orthodox Jew cannot maintain his sanity if he happened to see the face of a middle-aged female politician like Angela Merkel!

This world is frighteningly full of idiots.