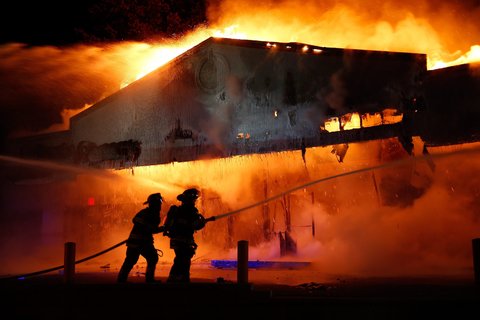 Now let me get this straight. You are a teenage thug who thinks it’s okay to use your bulk and strength to commit strongarm robbery. You take this a step too far when you encounter and threaten a cop who, in fear of his life, uses his firearm and kills you. And then you become… a national hero? A symbol of racial oppression in America?

I am not blind to the fact that racism remains prevalent in the USA. I know very well that a lot of the criticism of President Obama boils down to the simple fact that he is one uppity negro, an unforgivable crime in the eyes of too many. I understand all too well that despite exceptional success stories like that of Mr. Obama, the United States has a long way to go when it comes to eliminating racial prejudice. And I followed the news about the inept brutality of the police in Ferguson, including the arbitrary detention and arrest of reporters, a prominent Canadian journalist among them.

But Michael Brown was no saint. He was not a victim of racism. Nor was he a “gentle giant”. He was a thug who lived by, and died by the use of force. I am not saying that shoplifting, or even strongarm robbery, deserve the death penalty, but when you threaten an armed police officer, don’t be surprised if he reaches for his gun (as he has every right to do.)

And yes, Mr. Brown threatened the police officer. The grand jury found that it is so, and the physical evidence supports that conclusion. We may never know exactly what happened, but Mr. Brown’s DNA was found inside the police car and on the officer’s weapon, and unless you believe the cockamamie tale that the officer went berserk and decided to pull his much bigger opponent into the car through the car window, there is only one plausible way this could have happened: the way officer Wilson described it.

Unfortunately it was clear from the beginning that only one outcome would quiet the unruly masses: an indictment followed by a swift conviction. But I don’t believe in lynch mobs. As Barack Obama himself said, America is a land of the rule of law.

And just to be clear: I am not Michael Brown. I am not a thug, a petty criminal. I do not use my physical strength to rob convenience stores. And this has nothing to do with skin color. Nor do I believe that rioting, looting, and setting fire to businesses is the right answer to racial injustice.