The other day, I watched a delightful 30+ year old movie that I never saw before, The World According to Garp. In one scene, the protagonist decides to buy a house after a small airplane crashes into it, explaining that it is unlikely to ever happen again; that house has been “pre-disastered”. (Yes, it’s a logical fallacy, but the scene was still funny.) I think it was this movie that inspired me today, when I finally managed to talk to a human representative at Scotiabank, after being endlessly and needlessly frustrated by a voice recognition answering system. 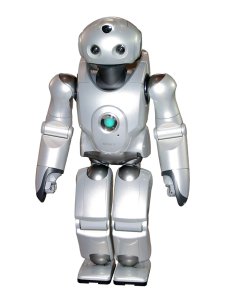 Voice recognition systems infuriate me. I am not alone, and this should come as no surprise. The phenomenon when something that looks, feels (or in this case, sounds) almost, but not quite, human creeps out people is so well known, it even has a name: Uncanny Valley. I am perfectly comfortable with answering systems that ask me to make menu choices by pressing buttons on my phone. Yet I am filled with blind fury and rage by voice response systems that, usually in an overly friendly and syrupy-sweet voice, ask me to explain, in words, what I am calling about. “I WANT TO TALK TO A FREAKING HUMAN YOU STUPID MACHINE!”

Fortunately, my self-control prevailed this morning. When (after stabbing “0” more than a few times with my finger while shouting nonsense, finally convincing the voice recognition algorithm to give up) I was at last connected to an actual (very nice) human lady, I remained polite. However, at the end of our conversation, I could not refrain from asking her to please pass on my request to the Powers That Be at Scotiabank to get rid of this stupid voice recognition system. She agreed that indeed, many customers are annoyed like I was. I commented on the fact that it was usually people like her who become the victims of their callers’ anger… when they arrive, like I did, pre-high-blood-pressured. She laughed so hard… I think I made her day.

As I am writing this, I am thinking that there might be another way to climb out of the uncanny valley: better AI. This is, after all, 2014, the age of self-driving cars and Google Search that knows what you are about to type even before you do. I could easily imagine a voice recognition system that, instead of spoon feeding me instructions like I was mentally retarded, began a natural conversation: “Hello, this is the Scotiabank automated assistant. This call may be recorded for quality assurance. How can we help you today?” (Avoid talking like the caller was retarded. Avoid using “I” because you are not a self-aware person. Speak in a natural voice, not like you were talking to someone hard of hearing, not unless they indicate that they are, in fact, hard of hearing.) If this system could actually carry out a decent conversation instead of being a poorly thought-out replacement of a touchtone menu system, it might work a lot better… and, for that matter, may even reduce the need for human operators as I bet it could respond to many inquiries successfully without human intervention.