So many talking heads are speculating so much about the missing Malaysian jetliner… and most of them will be proven wrong, of course.

So let me add my (likely wrong) speculation. It occurred to me this morning, as I was looking at a New York Times article with a wonderfully informative map: 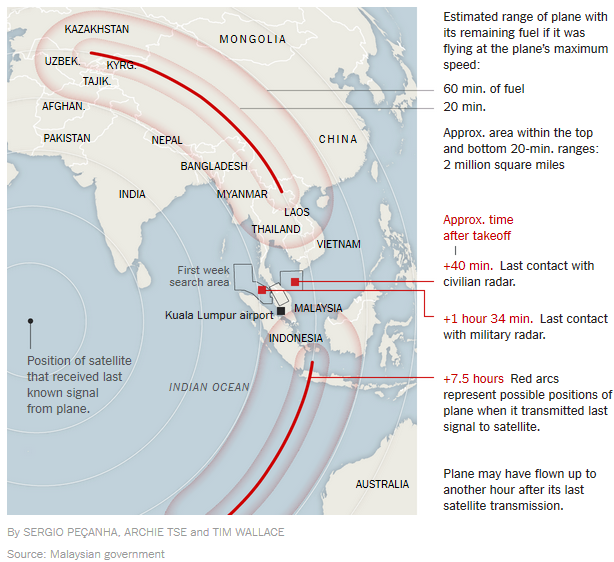 Look at the wonderful double arc that represents the possible locations of the aircraft at the time of its final contact with an Inmarsat satellite. Note how the center part of the arc is omitted, on the presumption that these areas are well covered by military radar.

But wait a minute… is this the same military radar that failed to notice a stray jetliner with no transponder code in real time?

Of course, we know that 6-7 hours after its last confirmed transponder response, the aircraft was still (at least partially) intact, its satellite phone system still functioning and powered. But not necessarily in the air.

The only actual facts that became available from the media are that the airplane was in regular communication with Malaysian ATC until it was handed over to the Vietnamese; that it never made contact with Vietnam ATC; that its transponder failed shortly before last contact, and its ACARS, some time before that; that there was a possible radar contact but which was ignored by the Malaysian military at the time; and that several hours later, its Inmarsat phone was still communicating.

So what if, after all the wild speculation and insinuations about rogue pilots or hijackers on board, taking the plane to Pakistan or ditching it in the southern Indian Ocean, what actually happened was, in fact, an accident? What if there was a progressive failure of the aircraft (e.g., due to an on-board fire or some other emergency) that may explain why systems did not shut down simultaneously? What if the pilots were nonetheless able to make an emergency landing somewhere, and the landing was smooth enough so as to not activate the plane’s emergency locator transmitter?

So I am betting a dollar that the plane will soon be found… in a remote part of southern Vietnam or northwest Malaysia or maybe Thailand. And if I am right, I hope it happens soon enough to rescue passengers who may still be alive.

Of course in all likelihood, I am just as wrong as all the talking heads on TV.