It has been known for some time: In the past decade, perhaps decade and a half, there was no significant global warming. 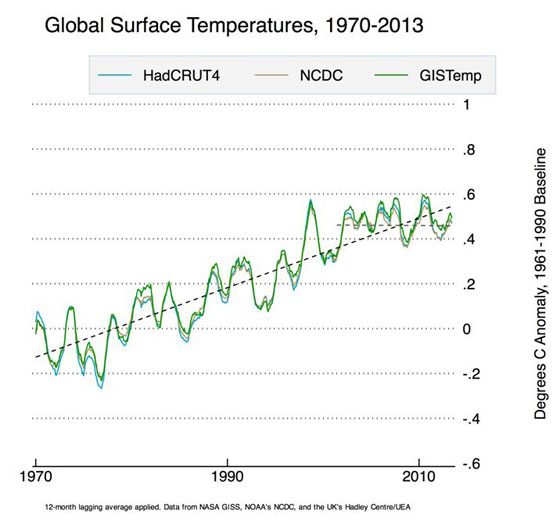 There are many explanations proposed for this slowdown/pause, and the actual cause is likely a combination of these: ocean surface cooling, natural climate oscillations, an unusual solar minimum, water vapor, aerosols, you name it.

Here is one problem with these explanations: These are the same ideas that were proposed, as alternatives to anthropogenic CO2, as causes behind the observed warming, by climate change “skeptics”, only to be summarily dismissed by many in the climate change community as denialist crackpottery.

Sadly, this may very well mean that climate skeptics will claim victory, and those inclined to listen to them will conclude that all this global warming hogwash was just some scam dreamed up by Al Gore and his cronies. Meanwhile, we tend to forget about other things that elevated atmospheric CO2 levels do, such as ocean acidification; not to mention other, equally threatening global environmental concerns, for instance species extinction occurring on a scale not seen since the day of the dinosaurs.