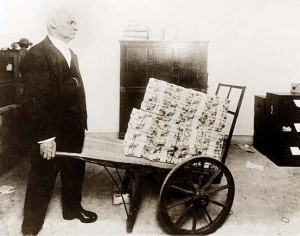 The news was this morning that a fellow was momentarily richer than Bill Gates, by a cool factor of a million or so, thanks to a small accounting mistake by PAYPAL. His account was worth more than 5000 times the US national debt.

Indeed, in one interview I saw mentioned, he did say that had this been for real, he’d have paid down the US national debt.

Sounds good and patriotic, except… could he?

Suppose you come into possession of 92 quadrillion dollars. The 16 trillion dollar debt (and then some) of the United States is just small change for you. Paying it down basically means buying the debt from debtholders.

Well, first of all, what if they don’t want to sell? There is a reason why the US can borrow so cheaply: US government bonds are a good, safe, secure form of investment. People who put their money into bonds do so for a reason, and not because there isn’t a demand for the bonds they hold.

Creating demand would drive down interest rates even more. By making the bonds scarce, you’d encourage people to buy them even at 0 or negative interest rates. Which would only encourage the US government to borrow more.

The deficit problem, after all, isn’t solved: there is still a fundamental imbalance between the governent’s revenues and expenses.

Continuing issuance of bonds by the government leads to inflation. This is a good thing insofar as debt is concerned, as debt can be inflated away, but with so much money available (your 92 quadrillion dollars), the situation can quickly become unstable, and hyperinflation may set in.

Ultimately, your noble attempt to help the US out of its debt crisis will result in a worthless currency, a collapsed economy, and the remainder of 92 quadrillion in your pocket, which may not even be enough to buy a loaf of bread.

Perhaps it was a good thing, then, that this was just a quickly corrected accounting glitch.