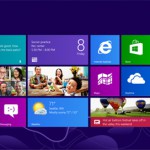 So a few weeks ago, I purchased a new laptop. For just a tad over 500 bucks, I was able to get a fairly decent lightweight ASUS machine. Most importantly, it is a machine equipped with a touch screen, allowing me to experience Windows 8 as intended by its designers.

And I really gave it a try. During my recent trip to Europe, I took this laptop along. And, I made it a point not to install software such as a replacement Start menu; I wanted to experience Windows 8 exactly as its designers intended.

What can I say? I am not impressed. The way the world of Microsoft’s “Modern UI” is grafted onto Windows just feels… well, it feels like a kludge. The apps are not bad but they leave a lot to be desired. The built in mail app crashed on me countless of times, and even when it was working, it was rather finicky when it came to synchronizing IMAP folders. The built in Skype app crashed on my countless of times, and even when it was working, it was often stuck in a disconnected state, with no obvious means to initiate a reconnect. Windows itself boots up very quickly, which is a good thing, but unfortunately I needed to reboot it more often than I should have: that is because Windows 8 sometimes just went berserk, for instance during a perfectly ordinary network copy operation that locked up so bad, I had to hard reset the machine to recover from this failure. Simply put, I am not used to having to reboot a modern operating system regularly as a means of recovering from trivial malfunctions.

When things worked, they worked fine. The mail app is actually quite decent. The gestures, one can get used to (again, a touch screen helps a lot.) The laptop played nice with my Bluetooth headset, which made Skype a pleasure to use (when it worked.) Nonetheless, I kept missing the Start menu, and I kept missing the Aero glass interface.

When I finally got back home, sitting down in front of my trusty workstation that runs Windows 7, it actually felt like I was finally using a “proper” version of Windows as opposed to a downgrade or older edition. This is not supposed to happen. Even with Vista, one may have felt that it was misguided in many ways, but it did feel like an upgrade of Windows XP. Windows 8 does not feel like an upgrade of Windows 7. Quite the contrary.

I will continue to use my new laptop, as I have gotten quite fond of this machine. It was very good value for the money. (Finally I have a laptop weighing less than 4 pounds that has zero trouble playing back an ISO image of a Blu-Ray disc and has enough battery power for a feature length movie.) And I don’t really mind Windows 8. It’s just… it’s just… just silly.