The National Post has an interesting set of infographics detailing the strength of North Korea’s conventional forces.

I made an attempt to create a condensed version: 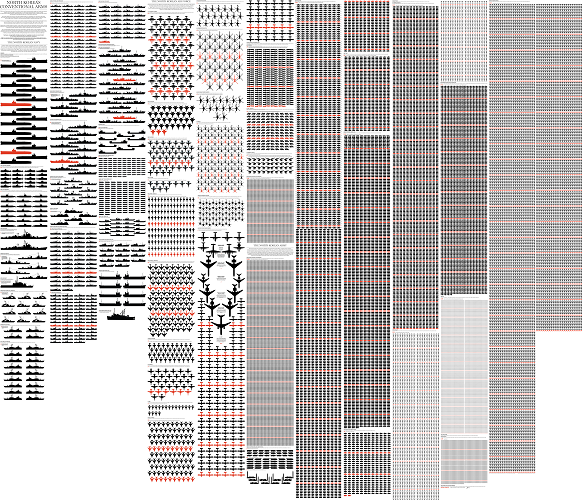 But if it’s too condensed, it kind of loses its punch, so it might be wiser to study the original. The bottom line: they have a scary number of surface ships, submarines, landing craft, torpedoes, aircraft both relatively modern (e.g., Mig-29) and ancient (biplanes!), and a huge army with a large number of artillery pieces, shoulder-launched surface-to-air missiles, SCUDs, you name it. Probably some non-conventional (chemical) stuff, too, that they would not hesitate to use. And on top of that, maybe a few crude nukes, albeit without decent delivery systems.

Then again… remember Saddam Hussein’s scary conventional army back in 1991, the world’s third or fourth largest at the time, and battle-tested during the Iraq-Iran war, equipped with SCUDs and WMDs? Didn’t do him much good, did it. Seeing SCUDs arrive in Saudi neighborhoods was a scary sight, but in the end, the damage they did was negligible. So maybe the numbers do not tell the whole story after all.

Still, a war in the Korean peninsula would be devastating for South Korea especially, but also for the world economy. And although I have no doubt that North Korea would vanish as a result, reintegrating the North would be a task that’s perhaps even harder than winning the war.

One Response to “Scary North Korea”