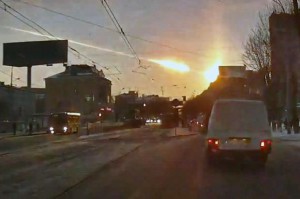 Chances are that if you tuned your television to a news channel these past couple of days, it was news from the skies that filled the screen. First, it was about asteroid 2012DA14, which flew by the planet at a relatively safe distance of some 28,000 kilometers. But even before this asteroid reached its point of closest approach, there was the striking and alarming news from the Russian city of Chelyabinsk: widespread damage and about a thousand people injured as a result of a meteor that exploded in the atmosphere above the city.

What I found rather distressing is just how scientifically illiterate the talking heads proved to be on television. First, it was CNN’s turn to be ridiculed after their anchor, Deborah Feyerick, actually asked the astonishing question, “Is this an effect of, perhaps, of global warming, or is this just some meteoric occasion?”

But then came the rest. I think it was on the Canadian network CTV (but I might be misremembering) where an anchor announced that an asteroid “the size of Texas” is about to fly by the Earth. Well… 2012DA14 is not the size of Texas, not unless Texas has shrunk a great deal since the last time I visited the Lone Star State (which was just a few weeks ago); the asteroid was only about 50 meters across.

And then the impact event in Russia. Initial estimates that I heard indicated an object weighing a few tons, traveling perhaps at 30 km/s; that’s still a significant amount of kinetic energy, maybe about a quarter or half of a kiloton if I am not mistaken. But then, a later and apparently more reliable estimate said that the object was perhaps 15 meters in diameter, traveling at 18 km/s. That, depending on the density of the object, is consistent with another estimate that I heard, 300 kilotons of energy released. If this latter estimate is valid, this means the biggest event since the Tunguska impact of 1908.

So where does the illiteracy come in?

And then there were the completely inconsistent size and mass estimates. A release by The Planetary Society spoke of an object 15 meters in diameter and weighing 8 tons. Say what? That’s just four times the density of air. The object in question actually weighed more like 8,000 metric tons.

Another CNN anchor was interrogating a physicist, wondering what causes these meteors to explode. The physicist was unable to explain coherently, and the anchor was unable to comprehend, the concept that it is just the kinetic energy of a very rapidly moving object that gets converted into heat pretty much instantaneously, heating up the air, which then rapidly expands and creates a shock wave. Come on guys, this is really not that hard!

Later in the afternoon, 2012DA14 finally did make its closest approach, as harmlessly as predicted, but there was obvious confusion in the news media about its visibility; yes, it was over the Indian Ocean at the time, but no, even there nobody could see it with the naked eye, much less find it “spectacular”.

I don’t think I am needlessly pedantic, by the way. On the contrary, I find it alarming that in our world which relies on increasingly sophisticated technology, people who are entrusted with the task of keeping us informed are this illiterate on matters of science and technology. Or even geography.