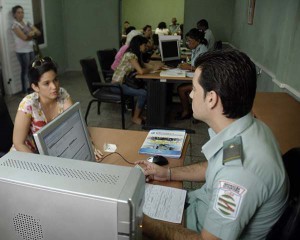 One of the most hateful aspects of communism, and perhaps the one that really cemented the impression that you lived in something akin to a labor camp or military barracks, was the institution of exit visas: the idea that travel abroad was a privilege that required government permission, which was not routinely granted.

Cuba, of course, had similar restrictions. The emphasis, astonishingly, is on the past tense: had. Because apparently as of now, Cuban citizens with a valid passport are entitled to leave the island without having to apply for an exit visa first. I am, actually, quite astonished. Could this be a sign of accelerating reforms in Cuba that will eventually end the island’s isolation? Or is that too much to hope for?

Still… congratulations to Cubans. May your new-found freedom be relatively unhindered by the entry visa requirements of many popular target countries.