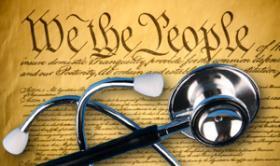 Rudy Giuliani made an interesting comment on CNN yesterday. He ridiculed his own party by pointing out that they are all for states’ rights… except when they are not, such as when they are pushing to amend the federal constitution to define marriage. He pointed out that a conservative party that stays out of both people’s pocketbooks and their bedrooms would be a winning combination. I couldn’t agree more.

So how come I am in favor of Obamacare? Well… I also like highways. Some libertarians may argue that by building a highway, government restricts your freedom to drive where you want and forces you onto a narrow strip of asphalt. Technically true, but I still prefer to live in a place with a well-developed national infrastructure. These days, I consider a universal health care system just as important a part of that national infrastructure as highways, schools, or electrical networks.