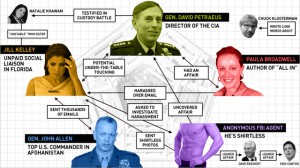 The sordid saga around the resignation of Gen. Petraeus continues. It became such a tangled story, Gawker.com actually published a flowchart to make it easier to decipher.

Meanwhile, however, The Guardian raises some very troubling points:

The Guardian comments about the “sweet justice” aspect of all of this: namely that America’s security surveillance system that is running amok is targeting the very people in charge of that system, such as the head of the CIA. However, I do not share their implied optimism; I don’t think the growth in surveillance will stop anytime soon. We are nowhere near close to anything like the McCarthy era’s pivotal “have you no sense of decency?” moment. For that, a lot more good people will have to be harmed a lot more gravely first.