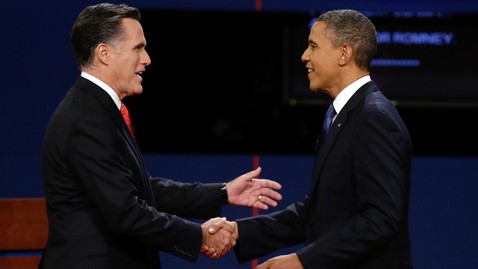 I admit I was underwhelmed by Mr. Obama’s presidential debate performance last night, and like many others, I think Mr. Romney exceeded expectations.

I was particularly annoyed by the number of opportunities missed by Obama to strike back at his opponent. The obvious one, of course, is whether Romney really believes killing Big Bird is the secret to a healthy economy. But more importantly… does Romney really believe that when you get a heart attack and you suddenly realize that your insurance company is screwing you, you can easily switch insurance? And what was this nonsense about “panels of government bureaucrats”? How is that any worse than panels of private insurance company bureaucrats who, unlike their government counterparts (who would only set policy) actually DO stand between you and your doctor, deciding which treatment to approve? Last but not least… a classic opportunity was missed when Mr. Romney was repeatedly talking about the middle class. Had I been in Obama’s shoes, I would have told him, “Mr. Romney, you never lived the life of a middle class American. I know middle class life. I lived most of my life as a middle class person. Mr. Romney, you are no middle class.”

That said, I was pleased by how civilized and intelligent this debate was. Neither candidate was trying too hard to be a partisan populist. This was refreshing.