This story should have ended there. And perhaps it would have, were it not for the words in the abstract that said, among other things: “Das zugrundeliegende Kraftgesetz wurde bereits von Newton (17. Jhd.) entdeckt. […] Diese Arbeit setzt sich also die analytische Lösung dieser bisher nur näherungsweise oder numerisch gelösten Probleme zum Ziele.” (The underlying power law was discovered by Newton (17th century). The goal of this work is then the analytic solution of these until now only approximately or numerically solved problems.)

This was more than enough for sensation-seeking science journalists. The story was picked up first by Die Welt with the title “Mit 16 ein Genie: Shouryya Ray löste ein jahrhundertealtes mathematisches Problem” (Genius at 16: Shouryya Ray solves centuries-old mathametical problem) and then translated into English and other languages, even appearing in the Ottawa Citizen. In short order, even a biographical entry on Wikipedia was created; now nominated for deletion, many are voting to keep it because in their view, the press coverage is sufficient to establish encyclopedic notability.

Cooler heads should have prevailed. What science journalists neglected to ask is why, if this is such a breakthrough, the youth only received second prize. And in any case, what on Earth did he actually do? His essay or details about it were not published. The only clue to go by was a press photo in which the student holds up a large sheet of paper containing an equation: 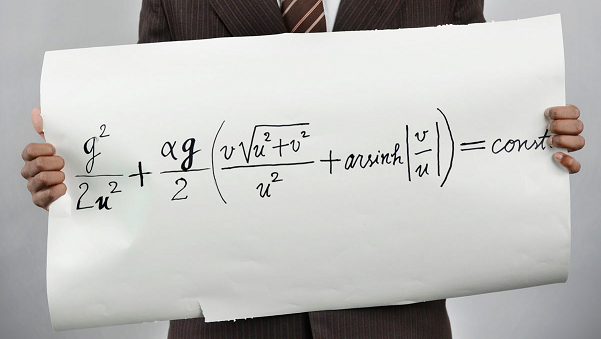 As I discussed this very topic on a page I placed on my Web site a few years back (reacting to some bad math and flawed physics reasoning in an episode of the Mythbusters) I felt compelled to find out more. I guessed (correctly, as it turns out) that \(u\) and \(v\) must be the horizontal and vertical (or vertical and horizontal?) components of the projectile’s velocity, \(g\) is the gravitational constant, and \(\alpha\) is the coefficient of air resistance. However, I am embarrassed to admit that although I spent some time trying, I was not able to find a way to separate the variables and integrate the relevant differential equations to obtain Ray’s formula. I was ready to give up actually when I came across a derivation on reddit (and I realized that I was on the right track all along, I was just stubbornly trying to do a slightly different trick, which didn’t work). The formula is correct, and it is certainly an impressive result for a 16-year old, worthy of a second prize.

But no more. This is not a breakthrough. As it turns out, similar implicit solutions were well known in the 19th century. A formulation that differs from Ray’s only in notational details appeared in a paper by Parker (Am. J. Phys, 45, 7, 606, July 1977). Alas, such an implicit form is of limited utility; one still requires numerical methods to actually solve the equation.

Much of this was probably known to the judges of the competition, which is probably why they awarded the student second prize.

Hopefully none of this will deter young Mr. Ray from pursuing a successful career as a physicist or mathematician.