Tarka is our oldest cat and she is not doing very well. Her kidneys are failing. 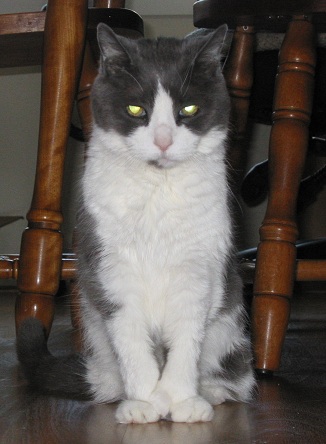 The day before yesterday, her appetite suddenly vanished, and she became lethargic, urinating outside the litter box. I became rather worried, so yesterday I took her to the vet, who determined that in addition to the ailing kidneys, she may also be suffering from hyperthyroidism. They took a blood sample (we’re still waiting for the results), gave her some fluids, and some new medication, and sent her home.

What can you do? In an ailing organism, as one subsystem after another begins to fail, they struggle to keep up and compensate for the failures of one another. It’s like the ever narrowing flight envelope of a high altitude airplane; if you’re a little faster, the airplane breaks apart, if you’re a little slower, it falls out of the sky, and the difference between the two velocities becomes more marginal the higher the airplane flies. (This, combined with a faulty airspeed indicator, may have been one of the causes of the Air France tragedy two years ago.) So how do we keep Tarka flying true for at least a while longer?

I don’t know… yesterday, after I got her back home, she was doing better, eating more than the day before. But today, she hasn’t eaten anything yet and she’s even more lethargic. Is it time to get seriously worried yet? Another visit to the vet may accomplish little beyond exposing her to yet more stress.