Almost two thousand years ago, on August 24, 79 AD, in the fine town of Herculaneum, Celer, slave of Quintus Granius Verus had a loaf of bread baked. The loaf never left the oven and they never had a chance to eat any of it. They were interrupted by the catastrophic eruption of Mount Vesuvius.

Celer is known to have survived the cataclysm, as his name later appears on a list of freed slaves. The bread also survived, albeit not in edible form. The carbonized loaf was discovered by archeologists in 1930. 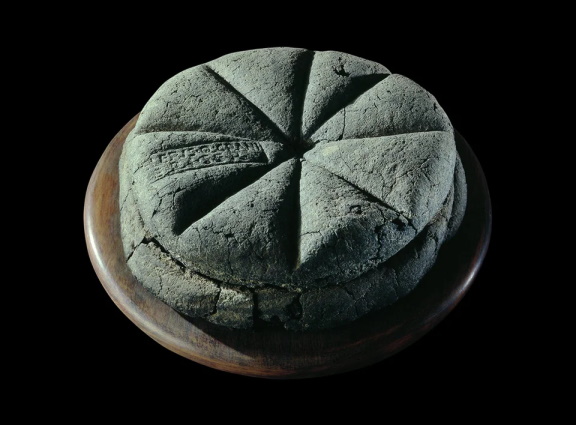 To think… a loaf of bread, intact, in such good shape, the stamp of its owner is clearly visible and legible. And it speaks volumes of a highly organized society, in which such stamped loafs of bread were regularly prepared at communal bakeries.

Darnit, it must have been tasty, too. There are modern recipes attempting to recover the flavor and texture of the original. One of these days, we ought to give it a try.

One Response to “A loaf of bread”