A few hours from now, it will be exactly 20 years since that fateful morning when, instead of going to bed after working through the night (I was very much a night owl in those days), I ended up spending the day glued to the television window on my old PC, running Windows XP and cable TV in a window, courtesy of a long obsolete ATI All-in-Wonder video card combining graphics with an analog TV tuner. 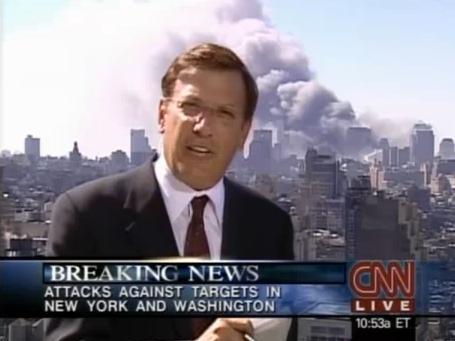 I had no doubt that the events of the day would change the world that we live in. What was not clear was how.

The good news: America’s “war on terror” by and large has to be considered a success. There have been no large-scale terrorist acts on US soil by militant Islamists since 9/11. But that’s pretty much where the good news end.

The bad news: Where should I begin?

First, the misguided occupation of Afghanistan. Yes, I know, hindsight is 20/20 and all that, but it was pretty obvious even back then that it is not possible to do an occupation on the cheap. There is one way to occupy a hostile country: put a sizable garrison in every town and a guardpost at every intersection, maintain order, and respond ruthlessly to attacks on your forces. Now the thing is, not even the USSR was willing to make this level of effort, which is why their Afghanistan venture was a fiasco. As for America, whoever came up with the idea that you can bomb a country into democracy need to get their heads examined.

Second, the criminally insane war on Saddam Hussein’s Iraq. No, Hussein was not a nice fellow. But removing him created a regional power vacuum that the theocracy in Iran was all too eager to fill. The one good outcome of this is that it created a previously unimaginable rapport between Iran’s enemies, namely Israel and the Gulf states. Otherwise, all the Iraqi venture accomplished is a destabilization of the region, the consequences of which we still reap.

And speaking of places like the Gulf states, this is another one of the unpleasant consequences of 9/11: Perhaps more than ever, the “land of the free”, the United States, loves cozying up with despots and dictators. This was especially prevalent during the Trump era, as Trump seemed unnervingly comfortable with the likes of Putin or MBS, even as he denounced democratically elected leaders committed to the values of liberal democracy.

Thankfully, the misguided military ventures are over. Chaotic last few days notwithstanding, US troops are finally out of Afghanistan. There are very few things for which Trump deserves praise, but his decision to pull out of Afghanistan, his reluctance to start new wars, are commendable.

If only the United States could overcome its internal partisan division, it could again resume its role as “leader of the free world”, a free world that now faces the dual threat of rising authoritarianism in many Western democracies, and the rise of a leader more authoritarian than anyone since Mao in a China that is now an undisputed economic superpower.

But for that, millions of Americans would first have to abandon scary conspiracy theories about a stolen election or a COVID vaccine that is an attack on their rights and freedoms; and other millions of Americans would have to abandon their commitment to impose their increasingly intolerant “woke” values, their “cancel culture” on their neighbors. And their lessons would have to be repeated elsewhere, throughout the Western world. In short, we have to somehow relearn some basic ideas of a liberal democracy, such as the notion that our neighbors whose political priorities differ from ours are not inherently evil, they are not the enemy. Can this happen? Will this happen in an era of social media bubbles, bubbles often controlled by foreign adversaries and their divisive propaganda, turning us against each other?

But before I get too pessimistic, I look at the long term trends. Here we are, in 2021, 76 years after one of the most devastating wars in human history ended with the use of two atomic bombs. When I was a child in the late 1960s, early 1970s, no sane person in the world would have predicted that we would live to see 2021 without another great war, without nuclear Armageddon. Yet here we are, worrying not about mushroom clouds but about climate change, not about Orwell’s totalitarian nightmare but about microplastics hampering efforts to clean up rivers and wetlands, not about famines and “Soylent Green” but about lithium or rare earth production for our batteries and high tech gadgets, not about hostile AI running our lives but about semiconductor shortages hampering the automobile industry.

Still I have to wonder, was 9/11 a wasted opportunity? Could the US and the world have responded better? Undoubtedly, I think.