I remembered something today. A set of playing cards.

I never had a card deck like this but some of my grade school classmates did. This was the (very) early 1970s in communist Hungary. It was through these cards that I first learned of the existence of luxury sports cars, supercars like Ferrari, racecars like Lotus. 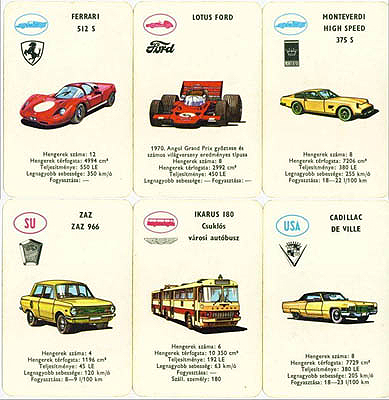 These were not some imports from the decadent West. Not subtle imperialist propaganda. These cards were produced by the state-owned Playing Card Factory (yes, that was the name of the company!) and they were much coveted by many 7-year olds. Like me.

But now that I think back, it makes me wonder: Exactly what were they thinking? I mean, this was a bleeping communist dictatorship (of the goulash variety, but still). What on Earth did they think they were doing, these self-appointed masters of agitprop, poisoning our young, impressionable minds with such blatant Western consumerist propaganda?