Somebody just reminded me: Back in 1982-83 a friend of mine and I had an idea and I even spent some time building a simple simulator of it in PASCAL. (This was back in the days when a 699-line piece of PASCAL code was a huuuuge program!)

So it went like this: Operative memory (RAM) and processor are separate entities in a conventional computer. This means that before a computer can do anything, it needs to fetch data from RAM, then after it’s done with that data, it needs to put it back into RAM. The processor can only hold a small amount of data in its internal registers.

This remains true even today; sure, modern processors have a lot of on-chip cache but conceptually, it is still separate RAM, it’s just very fast memory that is also physically closer to the processor core, requiring less time to fetch or store data.

But what if we abandon this concept and do away with the processor altogether? What if instead we make the bytes themselves “smart”?

The massive number of required interconnection between storage elements may appear like a show-stopper but here, we can borrow a century-old concept from telephony: the switch. Instead of sending data directly, how about having a crossbar-like interconnect? Its capacity will be finite, of course, but that would work fine so long as most storage elements are not trying to send data at the same time. And possibly (though it can induce a performance penalty) we could have a hierarchical system: again, that’s the way large telephone networks function, with local switches serving smaller geographic areas but interconnected into a regional, national, or nowadays global telephone network. 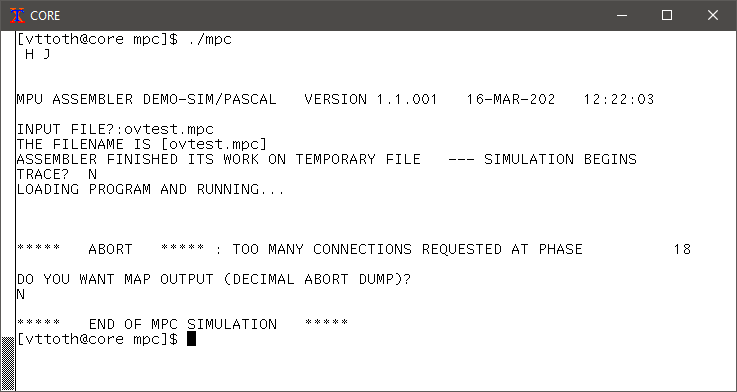 Well, that was almost 40 years ago. It was a fun idea to explore in software even though we never knew how it might be implemented in hardware. One lesson I learned is that programming such a manifestly parallel computer is very difficult. Instead of thinking about a sequence of operations, you have to think about a sequence of states for the system as a whole. Perhaps this, more than any technical issue, is the real show-stopper; sure, programming can be automated using appropriate tools, compilers and whatnot, but that just might negate any efficiency such a parallel architecture may offer.

Then again, similar ideas have resurfaced in the decades since, sometimes on the network level as massively parallel networks of computers are used in place of conventional supercomputers.

Gotta love the Y2K bug in the header, by the way. Except that it isn’t. Rather, it’s an implementation difference: I believe the PDP-11 PASCAL that we were using represented a date in the format dd-mm-yyyy, as opposed to dd-MMM-yyyy that is used by this modern Pascal-to-C translator. As I only allocated 10 characters to hold the date in my original code, the final digit is omitted. As for the letters "H J" that appear on top, that was just the VT-100 escape sequence to clear the screen, but with the high bit set on ESC for some reason. I am sure it made sense on the terminals that we were using back in 1982, but xterm just prints the characters.