The latest figures from the United States are scarier than ever. It appears Dr. Fauci was right when he predicted that the daily number of new cases will reach 100,000; according to the World-o-meter data that I’ve been following, there have been 101,461 new cases in the US today. 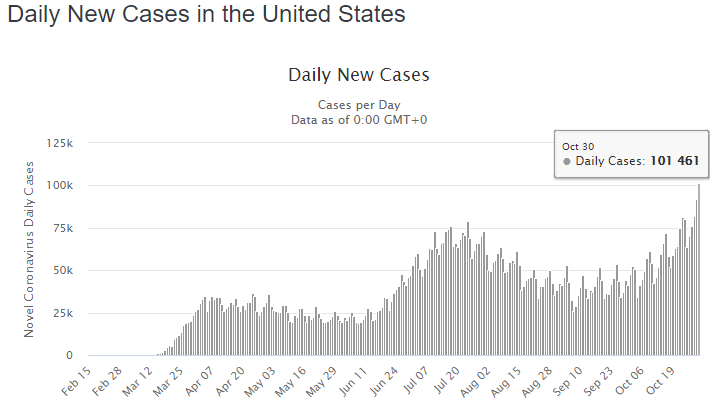 Does this mean that the United States officially qualifies as a “shithole country” with regards to how it manages the pandemic?

Per capita, these figures mean 306 new cases per million people in the past 24 hours.

But look. Here’s my country of birth, Hungary. They were doing well until they weren’t. In the past 24 hours, they produced 3,286 infections. For a country with only 9.65 million people, that’s a lot. So much, in fact, that at 340 cases per million people, they are actually ahead of the United States. (What a relief: America is not number one.)

And wait! Before you jump to the conclusion that Mr. Orban’s illiberal populism is to blame, look at France. In the past 24 hours, they produced a staggering 49,215 new infections. Granted, that’s less than half the number of new cases in the US. But they only have less than one fifth the population! So per capita, their figures translate into a truly whopping 754 new cases per million people.

So perhaps it’s not politics, after all.

None of that excuses Mr. Trump as he mocks experts and holds “super spreader” campaign events. Perhaps 306 is less than 340 or 754, but it is still a lot of people. And as a result, around a thousand Americans die every day who could otherwise have lived. Clearly, the country could do a better job.

Canada, too. Perhaps our statistics look better than American statistics, but there is no room for complacency. This second wave is hitting us hard, much harder than the spring outbreak, and there is no sign of it ending anytime soon. On the national level, the rate of new infections is below 100 per million people, but it’s much higher in hotspots. Today’s breaking news: The province of Manitoba registered 350 cases per million, exceeding the US average.

A vaccine may or may not be coming soon. Even if it does, it will likely be imperfect, offering limited immunity. And it will take months for a mass vaccination program to reach the requisite level for vaccine-induced “herd immunity”. Long story short, the end is not yet in sight. This is likely going to get worse, perhaps a lot worse, before it gets better.

But it’s not politics, people. Wear those damn masks. Wash your hands. Keep away from other people. Resist the temptation to visit grandma on her birthday or hold a large Christmas family dinner. For crying out loud, this is not some backdoor to communism. You are not a lesser human, a less manly man if you wear a mask and keep your “social distance”. This is centuries-old science, which is how human society was able to cope with past epidemics. Ignore it and you may be directly responsible for infecting, perhaps crippling, even killing your loved ones.

3 Responses to “Terrible but puzzling numbers”