My revulsion over Trump notwithstanding, every once in a while, when I am confronted with the blatant intolerance of “cancel culture” and the frequent dishonesty of “progressives”, I do feel that the Trumpists have a point.

Progressive outrage was swift. Sexual “preference”? Sexual orientation is not a preference. You do not choose to be gay, queer, or bisexual. True. (Though allow me to observe that pedophiles also do not choose to be sexually attracted to children. No, I absolutely do not equate a loving relationship between consenting adults and the abuse of children. Just making a factual observation, a rhetorical point if you wish, highlighting that “orientation” does not, by itself, make a person’s sexual behavior socially or legally acceptable and that sexual orientation notwithstanding, a person can choose, or prefer, to refrain from committing unlawful acts. Besides, if sexuality was just a matter of preference, would that make persecution acceptable? Is it okay to persecute on the basis of religion, which is obviously a matter of preference? Which is why, I think, the “consenting adults” standard is far more appropriate than any distinction between orientation vs. preference when we define what is legal, socially acceptable, and protected as a basic human right. But, I digress.)

So here is the thing. Here is how Webster’s online dictionary defined the word “preference” as late as September 28, 2020, according to the Wayback Machine: 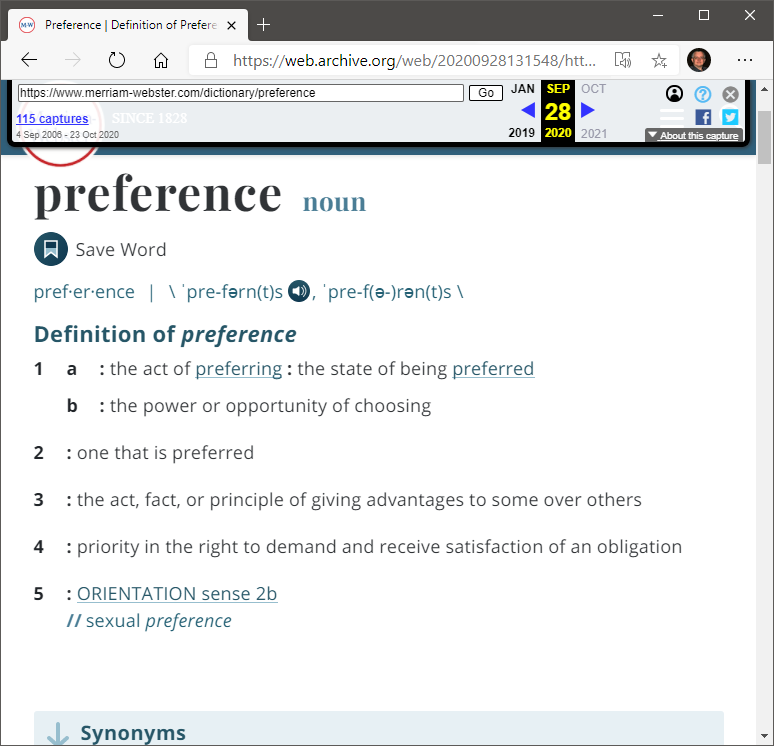 And here is how the definition changed on or before October 14 (when the Wayback Machine next captured the page) and what it says today: 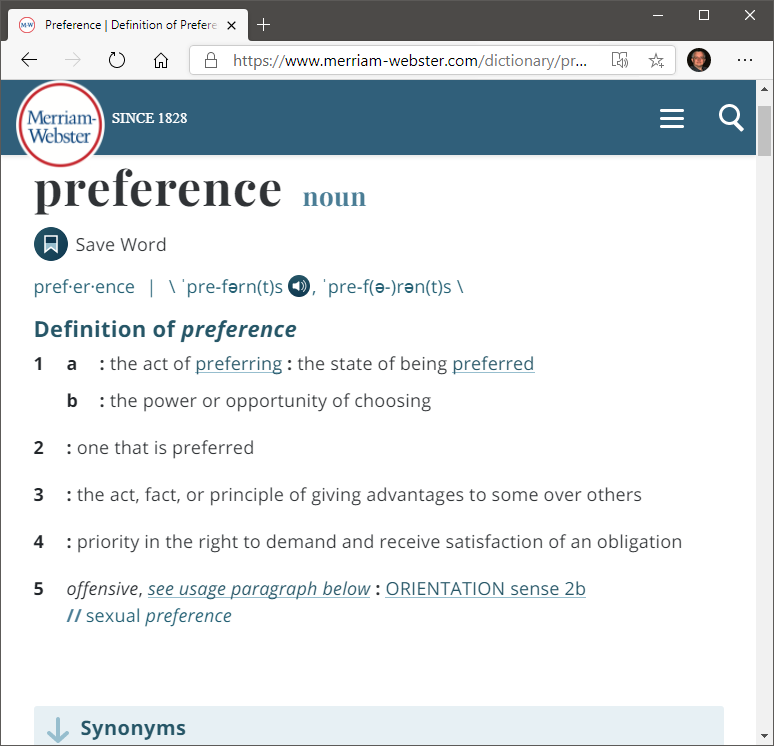 Can you spot the difference?

Yes, somehow magically, overnight maybe, the word “preference” acquired an offensive meaning that was previously unknown to the editors of Merriam-Webster. The explanatory paragraph states that “The term preference as used to refer to sexual orientation is widely considered offensive in its implied suggestion that a person can choose who they are sexually or romantically attracted to.”

If your conservative friends respond with “what the [expletive]!”, I think they have every right to be upset. This kind of altered reality smells like the work of the Ministry of Truth in Orwell’s 1984, or the altered photographs of the Stalin era with their vanishing commissars. In any case… “widely considered” by whom? (Expressions like this are actively discouraged by Wikipedia as weasel words, expressions of anonymous authority that should be avoided in encyclopedic definitions.)

It is one thing to condemn bigotry and racism. It is another thing to actively search for opportunities to be offended, even altering reality if that’s what it takes. This is not tolerance. This is virtue signaling. This is phony outrage, cheap political theater. The fact that the “progressive left” sinks this low, feels justified to sink this low (because, you know, Trump!) is sickening.

Of course there is a charitable explanation: Perhaps Webster’s simply responded to the “facts on the ground”, the criticism of Judge Barrett serving as a reminder to check, and update, this dictionary entry. But even if that were the case, shouldn’t such an update be based on more than a single instance of a political firestorm in the final weeks of a hotly contested US election cycle? Was it really necessary to make this change with such urgency? Given the fact that the entry directly relates to an unfolding, current political event, didn’t that deserve at least a footnote? Or perhaps just wait two weeks until the (badly rushed) confirmation process is over?

Bah. Who cares about such niceties, when there is such a wonderful opportunity to engage in righteous shaming.

NB: The screen captures above are mine. They are slightly altered (I removed commercial banners and information related to my personal privacy.) Their content was not manipulated.