Even as Facebook is battling white supremacism and fighting accusations of racial profiling, there is more nonsense going on.

In the past few days, I received several Facebook requests from accounts purportedly owned by young women, whose profiles contain sexually explicit, rather pornographic images and videos.

Here is one of the mildest ones (the majority of the images in this and other accounts from which I received friend requests were far, far more explicit in nature, including images depicting intercourse): 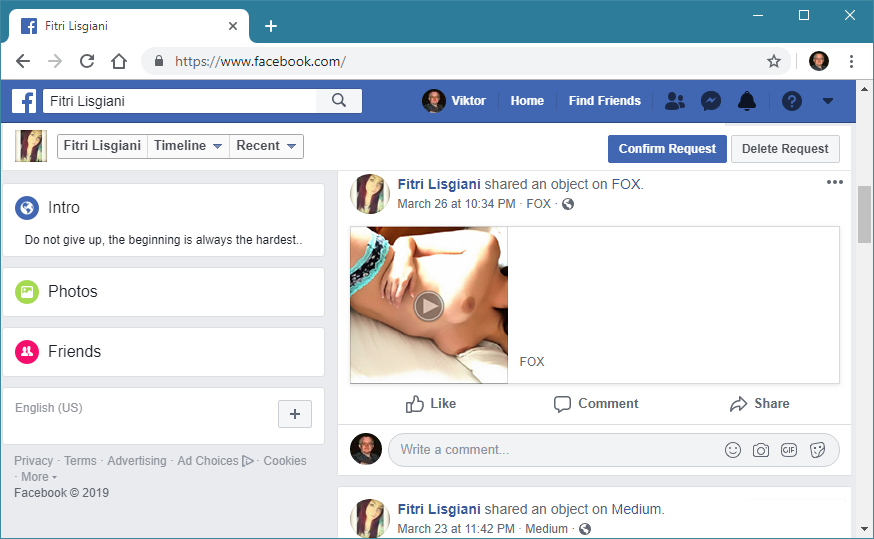 I do not wish to be a prude here; I am, after all, a middle aged male in relatively good health, and certainly not immune to, ahem, shall we say, visually stimulating images (though I admit I was never a fan of hard-core pornography. Not my cup of tea.)

But these Facebook accounts are obviously not accounts owned by bona fide young women trying to seduce older, happily married males like myself. They are probably overweight middle-aged male scam artists doing their shady business from their parents’ basements. Or worse yet, organized crime operating out of shady boiler rooms somewhere in Eastern Europe or Asia.

Thanks but no thanks. I have presently no desire to break my marital vow, but even if I did, there are better, safer ways.

As for these friend requests, I just block them and report the accounts to Facebook.