The other day, before the Mueller report came out, I described the political present throughout the Western world by comparing it to “history flashback” chapters in dystopian science-fiction novels.

But then, the next day, I saw someone present a Venn-diagram not unlike this one: 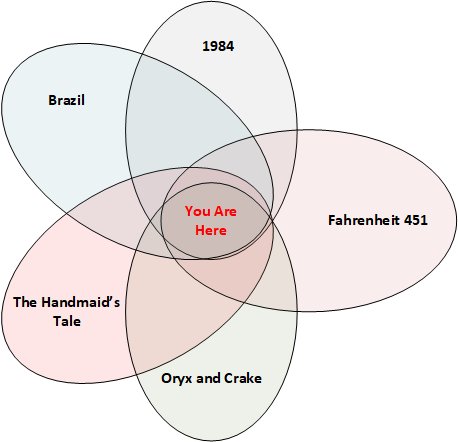 Apparently I am not the only one with this concern.

Then the Mueller report came, exonerating Trump at least on the issue of collusion. Not unexpected. I may have hoped for a different outcome but really, it wasn’t in the cards. Trump wasn’t conspiring to become president: he was conspiring to get a Trump Tower built in Moscow. He is not Putin’s co-conspirator; he’s at best Putin’s pawn.

But that’s the least of America’s problems, when the US Senate is increasingly behaving like another senate two millennia ago: the Senate of the Roman Republic, when it (for various reasons, all having to do with the politics of the day) became the enabler of Gaius Julius Caesar and his successor, Gaius Octavius Thurinus.

As the US Senate basically let Trump get away with usurping their power, allocating funds for his phony wall emergency, a line in the sand was crossed. This is precisely the Roman prescription: Using a variety of real or phony emergencies, the leader of the Republic first acquires and then holds on to an ever increasing number of emergency powers, until one day, he becomes emperor in all but name. Even if he is then assassinated, the new reality becomes normalized, and one of his successors will eventually declare himself ruler for life. The process may take decades, but the outcome is the end of democracy.

Any American who thinks it “cannot happen here” needs to be mindful of the fact that Romans were just as proud of their republican traditions as Americans today.

The crisis goes beyond the United States. Liberal democracy is in trouble throughout the Western world. Take Europe: Brexit, the rise of the far-right on the western side of the continent, the emergence of semi-authoritarian governments on the eastern flanks make one wonder if Europe can both remain united and retain its liberal democratic values.

Meanwhile, back in the United States, Democrats are drawing precisely the wrong lesson. Instead of working to preserve rational, fact-based governance, they decided that their problem has been all along that they are not ideological enough! And sadly, opposition forces throughout the Western world are following suit.

But ideology will not solve rising inequality, the stagnation of the middle class, the re-emergence of blatant racism. Excessive political correctness is no solution either. The antidote to rigid ideology is not more, or more rigid, ideology.

Recently I saw someone on Facebook describe the state that the world is in as an “extinction level event” threatening liberal democracy. And that’s precisely what I fear.