A little over two years ago, I made a decision to stick with Google-branded smartphones running unmodified versions of the Android operating system. I got fed up with brand-name phones that rarely, if ever, received even important security updates and were often hopelessly behind Google releases even when they were brand new on the market.

Our Nexus 6P phones served us well, but recently, first in mine then in my wife’s phone, the battery started to lose charge much too rapidly. This, apparently, is a known and common problem with these Huawei-made phones. Given that Google’s support for the Nexus 6P was coming to an end this month anyway, I decided to look for new phones. I was hoping to get another zero-dollar deal from Rogers, which is how we got those two 6P’s in the first place.

What a disappointment. Sure, the Rogers Web site does show certain phones available at a deep discount, even at $0. But they are available only with certain plans. And the cheapest such plan that I could find would increase our combined phone bill by a whopping $35 (plus tax) per month. No matter how I look at it it seems like a ripoff. Thanks but no thanks. I might as well just go out and buy a pair of unlocked phones, I figured, instead of signing up for these ridiculously expensive plans.

So I started looking, and soon enough my attention was focused on phones produced under Google’s Android One program. This program makes it possible for manufacturers to produce phones that run unmodified (or minimally modified) versions of Android, with the same monthly security updates and same system update schedule that Google-branded phones enjoy.

And that’s when I stumbled upon the Nokia 6.1, also known as Nokia 6 (2018), a supposedly entry-level phone at the ridiculously low price of 320 Canadian dollars.

Nokia, you ask? Indeed, the Nokia brand is still alive, or perhaps coming back to life is a better way to describe it. Microsoft purchased Nokia’s devices business years ago, but in 2016, it sold the Nokia-branded feature phone business back to a newly formed Finnish company founded by former Nokia folks. It is this company that has since created a range of beautiful, low-cost, entry-level smartphones.

Well, the phone may be entry level, but this particular model (TA-1068) still has an octacore processor, 4 GB of RAM, 64 GB of storage, not to mention that it’s an unlocked, dual-SIM phone (or alternatively, I can have an SD card in the second SIM slot.) And it still has features like a fingerprint reader and NFC, not to mention an FM radio. Solidly built, with an elegant design, it does not feel like a cheap phone at all, quite the contrary.

And so far, its battery life proved spectacular. Here is what it showed moments ago: 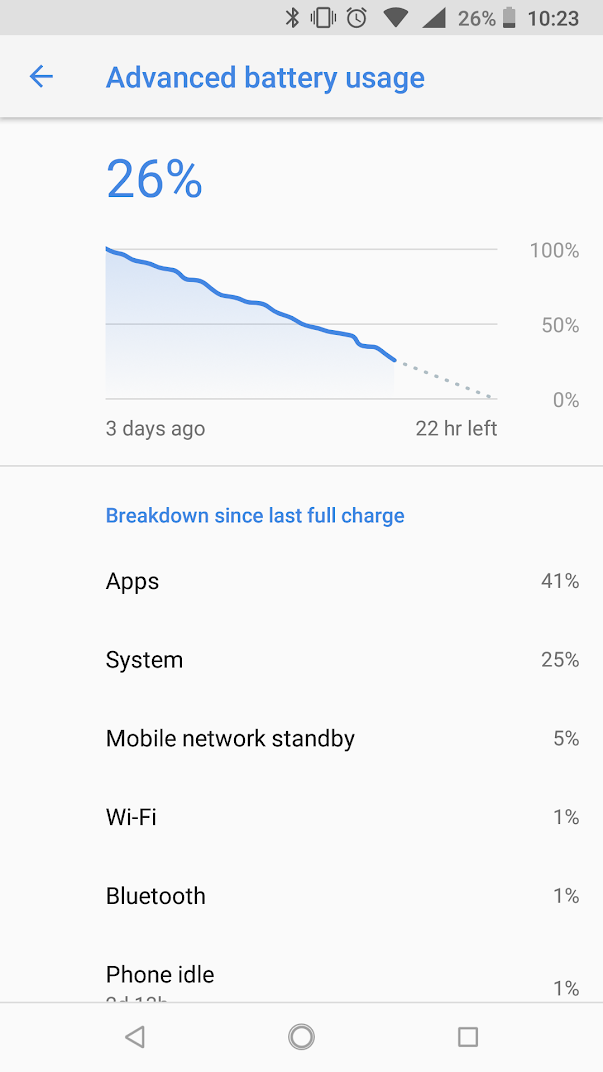 OK, it was a few hours less than 3 days, and spent mostly at home. But I use this phone a lot!

My only worry was that after a reliable series of monthly updates (which the phone dutifully downloaded after initial setup, necessitating several reboots) there was no October security update and October came to an end. I was guessing that it was because we were waiting for the Android 9 Pie update instead. My suspicion proved correct; the phone is downloading Android 9 right now.

This phone reminds me of my current travel laptop, which I purchased over three years ago I think. It was a kind of emergency purchase; my old laptop was “on the fritz”, and I did not want to spend a lot of money, so I ended up buying this lightweight ASUS laptop for just over 400 dollars. Best purchase ever! My previous laptops, always in the $2000+ price range, consistently proved disappointing. Not this one. Even three and a half years later, it remains snappy, eminently useful, capable of running even decent games on its dual core (four virtual cores) i3 CPU. It also has a touchscreen, handy at times, and something else that’s increasingly rare: plain VGA video output, which makes it much easier to use when I give a talk using older projection equipment. Once I realized how much better this laptop was compared to my expectations, I swapped out its 500 GB hard drive in favor of an SSD and that, of course, also significantly improved its performance. All in all, it does not feel “old” at all, quite the contrary, it is a decent, capable machine that is still a joy to use when I travel.

Of course in the smartphone era, we rely on our laptops less and less. With the ability to check my e-mail and social media accounts on the phone, I found that sometimes I would not even turn on my laptop for days while I am traveling, especially if I am not traveling on business.