The recent dramatic rise in the number of North Korean missile launches, combined with their successful test of a thermonuclear weapon and their announcement (so far, unverified) that they now have the capability to mount a weapon on top of an intercontinental ballistic missile, in combination with a US president who has a demonstrated willingness to “go rogue”, raises the very real possibility of an armed conflict between the United States and North Korea. A conflict that can quickly and uncontrollably escalate. 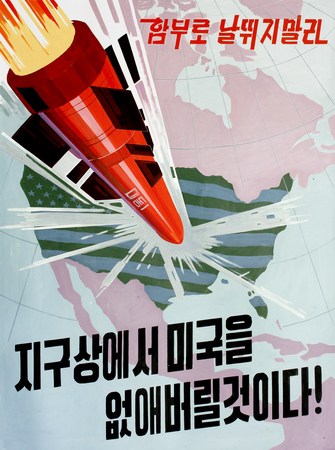 And it may all be based on a giant misunderstanding.

The almost unanimous opinion in the West appears to be that the DPRK is a rogue regime. That its megalomaniac dictator finds self-gratification in the building of nuclear missles. And that he represents a direct threat, a clear and present danger to the United States.

But what if this is not the case? What if the DPRK leadership is, ahem, rational?

Rational, that is, but based on a biased, distorted interpretation of the facts.

What if they genuinely believe that it is their regime that is being threatened by the United States? That nuclear weapons represent the only security guarantee against a rogue imperialist superpower?

And what if they actually believe their own propaganda version of history, namely that back during the Korean War, it was the DPRK army, under the leadership of its Great Leader, that defeated America, rather than Mao’s China achieving a stalemate? Or that it was indeed the United States that attacked the peace-loving DPRK instead of the DPRK launching a war against its southern neighbor?

These biases lead to the rational conclusion that, on the one hand, the threats faced by the DPRK are very real and thus a nuclear deterrent is essential; and that, on the other hand, bellicose talk can help remind the United States of a supposedly humiliating defeat and deter it from further aggression.

If this is the case, the proper response is negotiation: credible security guarantees offered to North Korea, tangible proof that there is no intent to attack. Threats, such as those uttered by Trump just a few minutes ago while speaking to the UN General Assembly, achieve the exact opposite: they reinforce North Korean beliefs that the American threat is real and imminent. Far from deterring them from pursuing a nuclear weapons program, it prompts them to accelerate their efforts.

And the almost inevitable outcome of the escalation of this war of words is real war. And when that happens, the proverbial excrement can quickly hit the ventilator. China may choose to get involved; reluctantly, perhaps, but they may believe that getting involved is the lesser of two evils. But that involvement can quickly result in direct conflict between China and the United States, or US allies like Japan. And if by any chance Russia chooses to get involved as well, the situation can quickly escalate into an unintended world conflict.

Cannot happen? Think again. 103 years ago this year, a major European power decided to launch a limited military strike to punish a rogue power, a supporter of terrorism, indirectly responsible for a high-profile political assassination. Within weeks, much of the world was embroiled in a conflict that nobody wanted, nobody believed in, and nobody knew how to win, how to end, or how to get out of. The Great War, the interregnum that followed including the rise of Nazism, the second World War and the rise of authoritarian communism worldwide cost, at the very least, 100 million lives. An experience I’d rather not see repeated, especially not with nuclear weapons involved.