I don’t often post pictures of my friends, but this time, I have my friend Perry’s permission.

Perry was flying west the other day. While waiting at the airport, he encountered a familiar face. The familiar face belonged to Canada’s Minister of National Defence, Harjit Singh Sajjan. 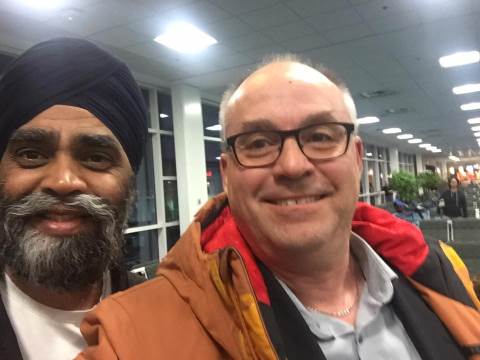 The Honourable Minister was probably flying back to his Vancouver riding, which he represents in Parliament.

Whatever the reason, the remarkable thing is this: Mr. Sajjan was traveling the same way most other Canadian would travel. On a commercial airliner, flying coach.

Let me repeat that, this time in boldface: Canada’s Minister of National Defence, traveling cross-country on a commercial airliner, flying coach.

I am so glad Mr. Sajjan allowed Perry to take this selfie, and that Perry kindly permitted me to repost it. This was not a moment designed for publicity. As far as I know, Mr. Sajjan does not publicize the manner in which he travels. He just… does the right thing.

And the other remarkable thing is that he can do this. It speaks volumes about our country and our government.