For the second time in a row, I am seeing a report on CTV about the protests against the Trudeau government’s decision to scrap electoral reform. Their coverage suggests that these are significant protests, representing widespread anger among Canadians.

They aren’t. Let me be generous: Although CTV’s cameraman did his darnedest best to make the crowd appear bigger than it really was, there were maybe a couple of dozen people, tops, behind this young gentleman leading the protest. 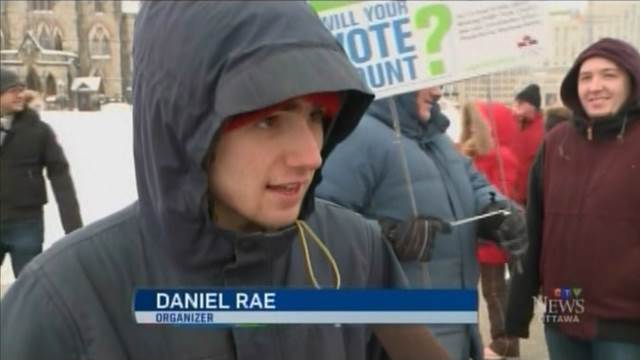 Meanwhile, I am actually happy that Mr. Trudeau listened not to loud-mouthed protesters but to the facts and was willing to spend some of his political capital to make the right decision. While first-past-the-post has its shortcomings, it is not inherently worse than other electoral systems, and it is absolutely better than any system that involves, e.g., party lists, legislators that do not represent a specific constituency. And messing with the electoral system could very well have established a precedent that, in the long run, might lead to American-style gerrymandering.

But I still don’t understand what CTV’s game is, pretending that these protests are more significant than they really are. I am, in fact, questioning the journalistic integrity behind the decision to give these minuscule protests disproportionate coverage.