Here is a quote from one of my favorite novels, Jack London’s Smoke Bellew:

“The world’s gone smash. There’s nothin’ regular an’ uniform no more. The multiplication table’s gone loco. Two is eight, nine is eleven, and two-times-two is eight hundred an’ forty-six—an’—an’ a half. Anything is everything, an’ nothing’s all, an’ twice all is cold-cream, milk-shakes, an’ calico horses.”

Why this particular quote? Because I was reading about Trump’s infamous medical report, prepared by a Harold N. Bornstein, MD, from the great city of New York. The doctor is real, but the medical report is… weird (reproduced below.) Apparently, Mr. Trump tests positive for everything.

But what is even weirder is the doctor himself and his Web site. Once a respectable site advertising a family practice, today it redirects to a site that sells an annoying teddy bear.

I kid you not. A site that sells “The Original Annoying Happy Birthday Teddy, the bear that never stops singing ‘Happy Birthday to you…'”.

So perhaps that explains why I think that anything is everything, an’ nothing’s all, an’ twice all is cold-cream, milk-shakes, an’ calico horses.

Or maybe I got high on something without realizing it.

I mean… is there anything about America’s esteemed President-Elect that is not a boldfaced lie? 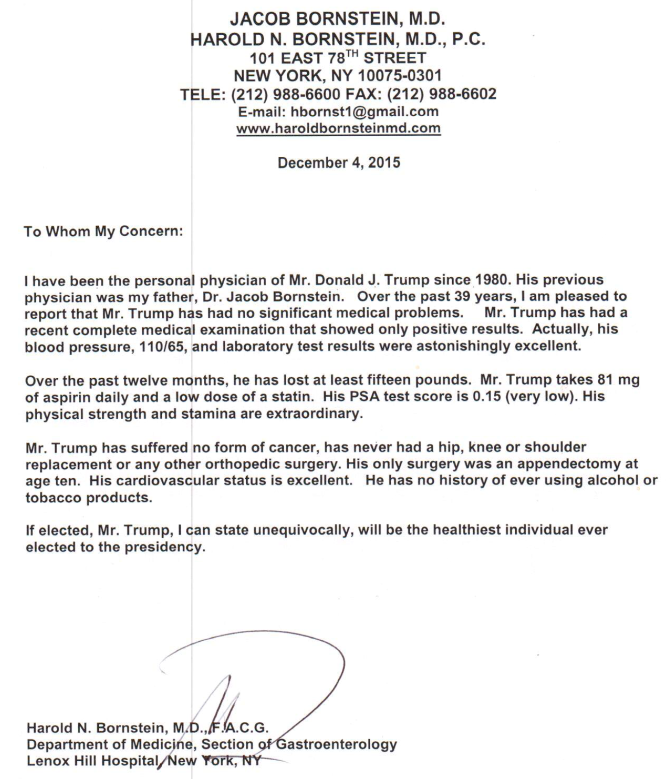