I was never a fan of conspiracy theories. Most popular conspiracies are highly improbable: maintaining complete secrecy would require thousands of people to cooperate for many years.

But just how improbably are conspiracies, really? Well, now there is a quantitative estimate, thanks a paper by David Robert Grimes. Grimes used several specific, high-profile cases of actual conspiracies to estimate the likelihood that a conspiracy is revealed by a participant. He found that while the probability that any individual participant betrays the conspiracy may be quite small, the likelihood that the conspiracy is revealed over time nonetheless approaches unity over the years, as demonstrated by the following diagram: 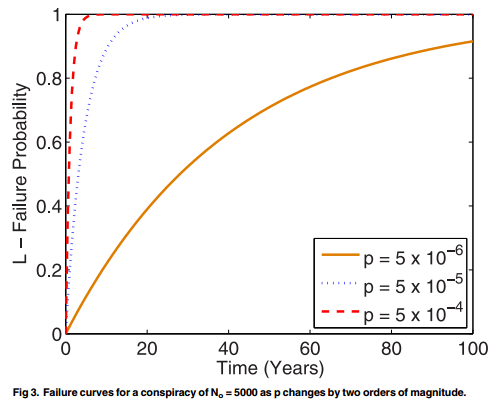 The parameter p in these curves represents the probability that any given participant will break his silence in a given year.

So then, this is it… by Grimes’s calculations, if the Moon landing had been a hoax or if similarly, vaccination or climate change were both just vast conspiracies, these would all have been revealed with a very high likelihood in the span of no more than a few years.

None of this will deter conspiracy theorists, I am sure. If all other arguments fail, they’ll just declare Grimes himself to be a member of the conspiracy, too. Well, for all you know, I may also be an agent of the secret cabal, using my blog to lure the unsuspecting into believing that man walked on the Moon, that vaccines save lives or that anthropogenic climate change is actually happening…