One of my favorite science fiction novels is A Canticle for Leibowitz by Walter M. Miller Jr. In the distant post-apocalyptic future that is the setting of the novel, a piece of sacred memorabilia attributed to the founder of a monastic order, Isaac Edward Leibowitz, is in fact a 20th century shopping list.

As it turns out, something similar exists in real life. However, Gal Sal was no saint; he was the owner of two slaves, En-pap X and Sukkalgir. Their names are recorded on a more than 5,000 year old clay tablet that probably served as a receipt or title of sorts. 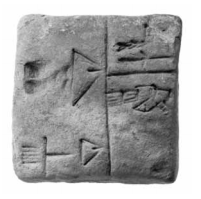 Though the dates are somewhat uncertain and there are other tablets of similar age, this trio may be the first people in history whose names have been preserved for posterity.

No heroic deeds. No epic battles. No dealings with gods or otherwordly spirits.

Just a receipt. Bureaucracy may, after all, be the oldest profession.