I finished this weeks ago but never had the time to post. My previous attempt to hack a Rogers cable decoder was only partially successful, so I gave it another try, with better results.

By “hack”, I don’t mean illegally obtaining cable signals or anything like. I was simply looking for a way to get composite video and stereo audio out of the “free” cable boxes that Rogers provides, as opposed to just a plain RF signal on channel 3. The reason is pretty mundane: I’ve been using a dual-tuner TV card in my computer for years, which allowed me to record one program while watching another. The transition by Rogers to full digital cable messed this up: the TV card has only one RF input, so it is impossible to attach two decoders that could supply two signals simultaneously. But the TV card does have two independent composite video inputs. So if only the decoders had the corresponding output…

Well, they do, sort of: the only problem was that the audio was an undecoded (multiplexed) stereo signal. To decode it, I first built a standard stereo decoder circuit, but that was before I learned that the NTSC standard for stereo also includes noise suppression. 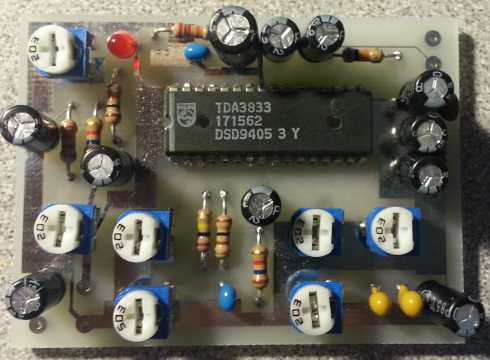 Once again, I used a custom printed circuit board of my own design, and once again, it worked like a charm. The only fly in the ointment is that this larger board no longer fits inside the original decoder casing without some “plastic surgery”; so chances are that if it ever comes to returning these boxes to Rogers, I’ll be paying for them instead. Oh well.