They did a group photo at the G-20 and our very own Prime Minister, Stephen Harper, was missing. According to a Canadian television channel, he was busy engaged in a discussion with an official. According to the BBC, he was in the toilet. 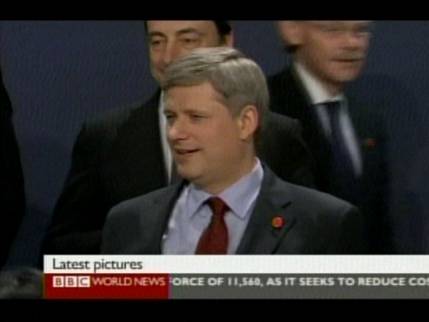 So they redid the group photo. Or tried to, anyhow. This time around, Berlusconi appeared to be missing… there was no word why.

Nonetheless, signs are that the G-20 meeting was (at the very least) not a failure, and perhaps even a modest success. I guess we’ll know in the next couple of days. But, if it is not just wishful thinking and real, meaningful decisions were made, then perhaps this is where the world changes to a track different from the one followed in the 1930s… instead of choosing protectionism, leading to a collapse of international trade, we’re choosing to keep the system of international trade robust and intact.

The BBC just updated their story: quoting a Harper press secretary, they’re now saying that Harper was indeed engaged in a conversation with an aide, he was not in the washroom.