Beagle 2 has been found.

Beagle 2 was the British lander component of the European Space Agency’s Mars Express mission. It was supposed to land on Mars on Christmas Day, 2003; however, no radio signal was ever received from the spacecraft. Beagle 2 was considered lost, its fate unknown.

But now, it has been found. Beagle 2, together with its parachute and rear cover, have been spotted by the High Resolution Imaging Science Experiment (HiRISE) camera on board the Mars Reconnaissance Orbiter (MRO) spacecraft, which itself has been orbiting Mars since March 10, 2006. 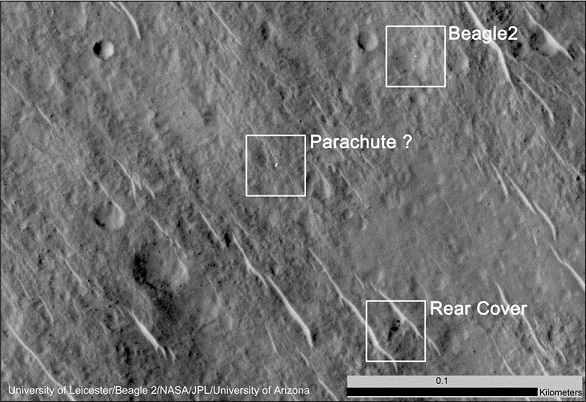 Imagine: a spacecraft orbiting another planet was able to spot an object barely more than a square meter in size, on that planet’s surface.

We may not yet have humans walking on Mars, but nonetheless, we live in amazing times. Now if only we somehow managed to stop murdering and hating each other, I might even begin to believe that there is hope for us yet…