Some details have been released (leaked?) by Inmarsat and the AAIB about their analysis of the flight path of the missing Malaysian airliner. Some details remain frustratingly absent.

Relying on the measured frequency of the signal received from the missing jet, they plotted possible courses of the aircraft and they concluded that only the route that took MH370 to the southern Indian Ocean is consistent with the data. Here are the two critical slides from the annex of their released material: 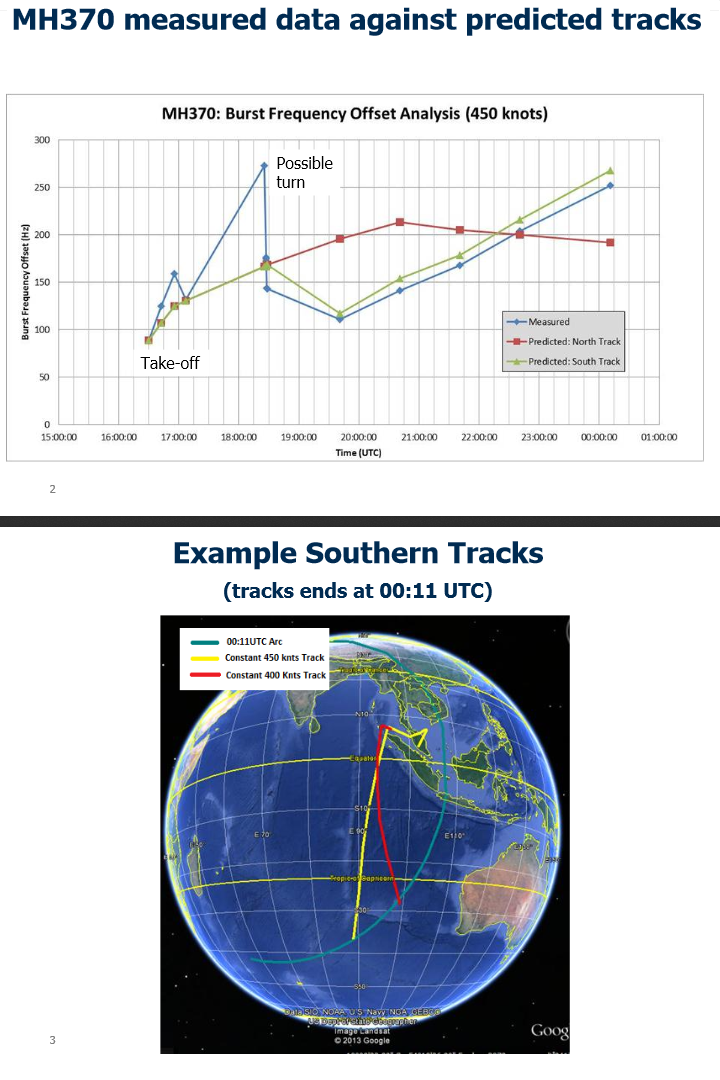 They are clearly quite confident about the validity of their analysis, and they may be right. Still, there are a few potential issues with which I am not comfortable.

The analysis obviously relies on two key assumptions: first, that the aircraft traveled at a constant speed and second, that its transmitter had good frequency stability. I am not familiar with Inmarsat equipment used on board aircraft, but I do know that a frequency drift of a couple of hundred Hz, over a period of time of several hours and under changing environmental conditions, is not at all unusual [Update (2014/03/28): I now know (thanks, Craig!) that Inmarsat equipment uses an oven-controlled oscillator, with a frequency stability of a few 10 Hz or better over the course of a year, so this is a non-issue] for an oscillator that is running at around 1.6 GHz (which, I believe, is the frequency range used by Inmarsat.)

The analysis also relies on the estimated range at the time of final transmission, which is what was used to generate the infamous “arcs” along which the airplane is expected to be found. Presumably, similar estimated ranges are available for all the intermediate data points. However, this range information was not published in the currently released document. [Update (2014/03/28): Intermediate range arcs were, however, published by the Washington Post on March 21 (thanks again, Craig!).]

It is also unclear to me why the northern route can be excluded, as the top slide shows. If the satellite was stationary with respect to the ground, the northern and southern routes would have identical Doppler signatures. Presumably the difference is due to the fact that the satellite, though geostationary, still moves with respect to the Earth’s surface, e.g., because its orbit is inclined. [Update (2014/03/28): The orbital inclination of the satellite in question is 1.6° (once again, thanks, Craig!)] But this is not explained.

Finally, I am also concerned about the large deviations in the early stages of flight between the predicted and observed values and what it says about the validity of the analysis.

Just to be clear, I do not subscribe to conspiracy theories. I do believe that it may have been premature to exclude the possibility that the aircraft made an emergency landing and remained intact in a remote area not far from the location of its last transponder signal, but I may very well be wrong about this. However, I do think that a little more transparency would be useful.