The Swiss are a proud people. Their country has been peaceful and prosperous since Napoleonic times. Several years ago, when I was in Bern, Switzerland, streetcars bore German-language signs advertising 200 years of safety and security. This was made possible, in part, by a strong and effective defense force, which would make any invasion too costly for a would-be attacker. 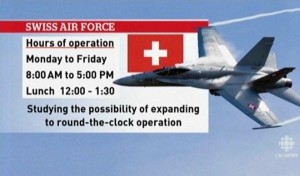 Or so I thought. Until yesterday, that is, when in the wake of the recent hijacking of an Ethiopian airliner, which eventually landed in Switzerland, the CBC helpfully explained the reason why the airliner was escorted by French and Italian fighter jets. You see, the Swiss Air Force operates only during normal business hours. Invading armies should take note: Switzerland is closed after 5 PM, so if you are late, you might want to reschedule your invasion plans for the next business day.