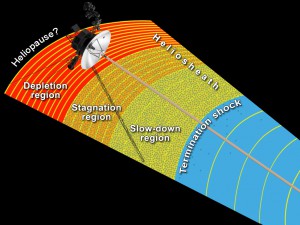 Last week, it was all over the news: Voyager 1 has left the solar system.

Except that it really didn’t. Voyager 1’s trajectory is, and will continue to be, dominated by the Sun’s gravity for thousands of years. Voyager 1 is significantly closer to the Sun than Sedna (one of the icy dwarfs in the outer solar system) at aphelion. And then there is the hypothesized Oort cloud, a spherical cloud of planetesimals roughly a light year from the Sun. Voyager 1 will take thousands of years to travel that distance.

Of course, Voyager 1 is way outside the orbit of the outermost planet, Neptune. But that happened decades ago, back in the 1980s. By 1990, Voyager 1 was far enough from the Sun to be able to take its famous “family portrait”, a mosaic that covered six of the eight planets (Mars was too faint, while Mercury was too close to the Sun.)

So what exactly happened this month? Well, Voyager 1 crossed the heliopause, the boundary where the solar wind collides with the interstellar medium. It is also the location where magnetic fields are no longer dominated by the Sun.

So it is a significant milestone, but it is somewhat misleading to suggest that “Voyager 1 has left the solar system”, which we heard so many times in the past several days.