Bittersweet, or solanum dulcamara, is a species of vine. According to my wife the gardener, it was a vine of this species that climbed up a light pole just outside our house a few years ago.

Bittersweet is actually considered an invasive weed in North America, and for a good reason. Just look at the picture below… the vines climbed all the way to the top, completely engulfing the concrete light pole. 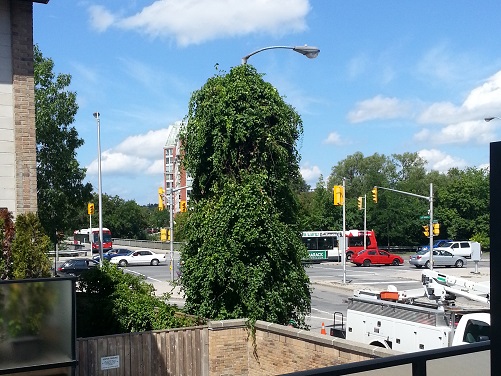 We decided to call this thing Shrek. The name was inspired not so much by the animated character but by a New Zealand sheep named after it, which avoided being caught and shorn for six years.

Alas, our Shrek has also been caught and shorn. The City of Ottawa had enough of it (and with good reason, considering the damage it likely did to the concrete light pole, not to mention the increased surface area which may very well cause the light pole to topple in a windstorm.) A few weeks ago, a city crew appeared and cut Shrek at the roots. This is what Shrek looked like as a result last week: 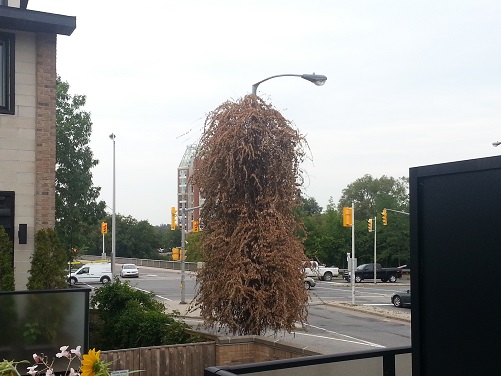 Of course, we hope that Shrek will grow back eventually. That light pole just wouldn’t look the same without it.

Meanwhile, though, it’d be nice if the city opted to finish the job and remove the now dead remains of the plant from its light pole. Or maybe they hope that winter weather will do the trick?