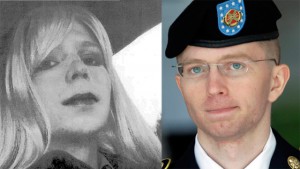 In recent days, the Kremlin-funded 24-hour news network, Russia Today, spent a fair amount of their airtime discussing the case of Bradley Manning, the US soldier who leaked large chunks of information to Wikileaks a few years ago and was recently sentenced to 35 years in prison.

The breaking news this morning is that Bradley Manning expressed his desire to begin hormone therapy, eventually undergo a gender reassignment operation, and live his, or rather, her life as a woman named Chelsea Manning.

I wonder how Russia Today will deal with this in the wake of Russia’s recently enacted, Draconian anti-gay legislation.

[Correction: In the first version of this blog entry, I referred to the network as “Russia Times”. Its name is actually Russia Today, or more precisely, just RT.]