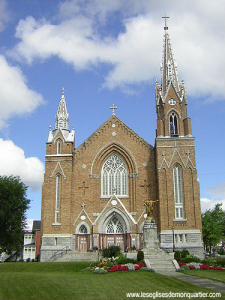 I was watching RDI’s coverage of the memorial ceremony that was taking place last hour in Lac-Mégantic, the location of the horrific derailment a few weeks ago that claimed so many lives.

I was impressed by the size and beauty of Sainte-Agnés church where the mass was taking place, so I went to Google to find out more.

It was, of course, unsurprisingly difficult to find background material, as search results were dominated by recent articles about the disaster. But, after wading through some directory entries and such, I came across a true gem: the story of the “Electrical Priest”, Father Joseph-Eugene Choquette.

When he was not attending to his priestly duties, Father Choquette spent a fair bit of his time as an amateur scientist. And what an amateur he was!

Bringing a player piano to his church (and drawing the ire of his parishioners when they found out that it was not their vicar who was in secret a talented musician) was just one of his many pranks (perhaps an unintended one in this case). Apparently, he also liked to play with electricity, to the extent that visitors to his house were often shocked by a jolt of current when they touched a doorknob or sat down in a booby-trapped chair.

But Father Choquette was interested in more than mere pranks. He also experimented with telephony and electric lighting. Having installed a personal lighting system (powered by a dynamo hooked up to a windmill) that proved to be a success, he proceeded with a more ambitious plan: a generating plant to light the whole town. He remained directly involved with this project until his death; parishioners often found their vicar strapped to a pole 25 feet in the air, working on a faulty transformer.

When Father Choquette died, he left much of his equipment and collections to the Sherbrook and Saint-Hyacinthe Seminaries and to the Convent and College of Megantic. That was nearly a century ago. I wonder if any of his belongings still survive somewhere.