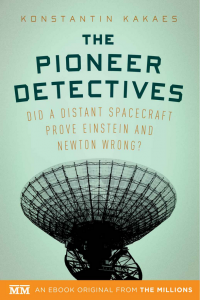 I spent a part of yesterday afternoon speed-reading Konstantin Kakaes’s new e-book, The Pioneer Detectives. It’s a short book (still well worth the $2.99 Kindle price) but it reads very well and presents a fair picture of our efforts researching the origin of the anomalous acceleration of the Pioneer 10 and 11 spacecraft.

Yes, I was one of those “detectives”. (In fact, I still consider myself one, as I don’t believe our job is quite done yet; we still owe the community a detailed account of our research and an update of our Pioneer Anomaly review before we can move on with a clean conscience.) So I have an insider’s view of this very intriguing story.

I had a chance to talk with Kakaes at length when he visited me here in Ottawa last year. Over the years, I learned to be apprehensive when talking to journalists; often, the words they put in your mouth bear little resemblance to what you actually said to them when interviewed. I was relieved that this was not the case now: at no time did I feel compelled to cringe while reading the book.

So I really enjoyed Kakaes’s telling of our story. Indeed, I think I learned a thing or two about presenting a complex subject to a non-specialist audience. Kakaes, an accomplished science journalist, manages to do so without dumbing it down with excessive oversimplifications.

One person whose views may not be as favorable is the original discoverer of the Pioneer anomaly, John Anderson. I am told that Anderson is not fond of our results. Kakaes believes that this is because Anderson is “blinded by his desire to believe in something new, in something unexplained. He wants so badly not to know.” Yes, scientists are people, too, and the prospect that a discovery you made, once thought profound, may just be an engineering fluke is not an easy one to swallow. Kakaes does what a responsible journalist must do: he tries to paint an objective picture, which sometimes includes unflattering bits. Yet I think that John Anderson has more scientific integrity than Kakaes gives him credit for.

And to be perfectly honest, I am also disappointed with our own results. When I first read about the Pioneer anomaly (as an outsider, long before my involvement) it seemed to fit perfectly into the big scheme: namely that perhaps the same physics that was responsible for significant deviations from Einstein’s and Newton’s predictions on cosmological and galactic scales might also be responsible for a small but measurable deviation here in the solar system. This was a fantastic prospect!

Sadly, it was not to be. What once seemed like a revolutionary, paradigm-shifting result has been reduced to a small footnote in the history of gravitational physics. Yet I think that our story is nonetheless intriguing. Kakaes seems to think so, too, judging by his book. A book that I am happy to recommend.