Today, the weirdest thing happened on my main desktop computer: the right-click menu of Windows Explorer, as well as the Windows desktop, disappeared. I was also unable to bring up the Properties dialog, even through the menu bar. 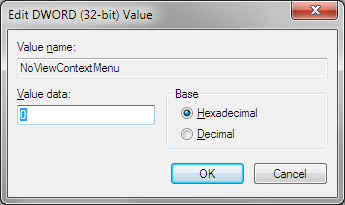 The worst part of it is, I could not figure out what happened. A reboot didn’t fix things, nor did an obvious Registry hack (making sure that HKCU\Software\Microsoft\Windows\CurrentVersion\Policies\Explorer\NoViewContextMenu is set to 0. For some reason, it was set to 1.) Eventually, I resorted to the big guns and used System Restore (thanks to the fact that I do backups daily, I had a restore point from 2AM this morning) to fix things. Still, it bugs me that something happened that I do not understand.

In comparison with another, mostly identical system, I noted that the other system had no subkeys under the Policies key whatsoever. So I wonder exactly when and how the Explorer and System subkeys were created on this workstation.

And while I was at it, I searched the Registry a little more and found another, possibly relevant entry: HKLM\Software\Microsoft\Windows\CurrentVersion\Policies\Explorer\NoViewContextMenu. Once again, this Registry value is missing from the other machine, so I wonder how, why and when it was created on this workstation.

This is deeply disturbing. I don’t like mysteries, especially not on a machine that I use on a daily basis. Life is short and one does not need to resolve every mystery, but occasionally, such unexpected behavior can be a sign of a security issue.