In a post a few days ago, I expressed my skeptical views concerning the interpretation of some of the recent Higgs results from CERN. I used a simple analogy, an example in which measuring the average height of the inhabitants in a set of buildings is used to determine which of them may house the Harlem Globetrotters.

However, I came to realize (thanks in part to some helpful criticism that my post received) that I left out one possibility. What if the buildings are too small? Or the ‘Trotters are just too, hmm, tired after a long party and end up in the wrong building? In that case, a measurement may look like this: 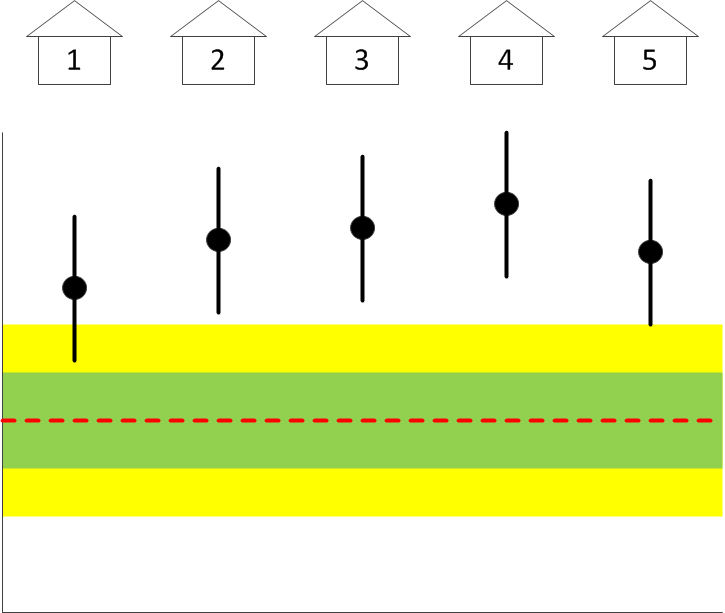 If we have an a priori reason to believe that, for whatever reason, the players are indeed spread out across several buildings, then we can indeed not expect to see a sharp peak at #4 (or whichever building is assigned to the Globetrotters); instead, we should see a broad excess, just what the CMS experiment is seeing when it measured the decay of the presumed Higgs boson into a τ+τ− pair.

So is there an a priori reason for the data to be spread out like this? I believe there is. No instrument detects τ leptons directly, as their lifetime is too short. Instead, τ events are reconstructed from decay products, and all forms of τ decay involve at least one neutrino, which may carry away a significant portion of the lepton’s energy. So the final uncertainty in the total measured energy of the τ+τ− pair can be quite significant.

In other words, many of the Globetrotters may indeed be sleeping in the wrong building.

Nonetheless, as my copy of the venerable 20-year old book, The Higgs Hunter’s Guide suggests, the decay into τ leptons can be a valuable means of confirmation. Which is perhaps why it is troubling that for now, the other major detector at the LHC, ATLAS, failed to see a similar broad excess of τ+τ− events near the presumed Higgs mass.