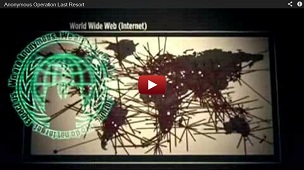 The USSC.GOV Web site is down (or rather, there is no DNS service for ussc.gov or www.ussc.gov; I guess that is one way of taking down a corrupted Web site) but I found the defaced content in Google’s cache, including the Anonymous letter in its entirety, as well as the accompanying YouTube video (with surprisingly good production values.)

The letter is a long rant, but I am not altogether unsympathetic to what they have to say. The death of Aaron Swartz was an absolute disgrace. It was also a completely unnecessary demonstration of a justice system gone berserk. And the concerns expressed by Anonymous over disproportional punishments, the presumption of innocence gambled away by plea deals in the face of excessive sentences and unaffordable justice, or criminalization of violations of terms of service are all concerns I share.

What I don’t share is the belief of Anonymous that the perceived criminality of government can be repaired by criminal acts of their own. Their “solution” does not lead to a better society; it leads to anarchy. Then again, weirdly and confusingly, Anonymous appear to understand this when they write, “We understand that due to the actions we take we exclude ourselves from the system within which solutions are found. There are others who serve that purpose, people far more respectable than us, people whose voices emerge from the light, and not the shadows.”

I am more than a bit puzzled by the second half of their message. In this half, they describe a “warhead”, perhaps some cybertool that they are distributing to their followers this way. The instructions are simple: download all components, assemble them, and wait for the moment that hopefully never comes when you get a decryption key.

Ok-kay… well, the components no longer appear to be available (if they ever were) on the listed mirror sites, but that’s not the puzzling part. The puzzling bit is the command line offered that the would be Anonymous supporter presumably had to execute after downloading all the files named Scalia.Warhead1, Kennedy.Warhead1, Thomas.Warhead1, Ginsburg.Warhead1, Breyer.Warhead1, Roberts.Warhead1, Alito.Warhead1, Sotomayor.Warhead1, Kagan.Warhead1:

In plain English: assemble all the parts into a file named Warhead-US-DOJ-LEA-2013.aes256. If successful, wipe out your entire hard drive.

Say what? Yes, wipe out your entire hard drive. That’s what rm -rf / does on a UNIX system.

That is, that’s what rm -rf / does on a UNIX system if a) you are logged in as root, and b) you are dumb enough to execute it.

So what exactly are Anonymous trying to pull here? Do they think American investigators are so dumb that they would follow these instructions without question, but their own followers are smarter? Is it a kind of an intelligence test to prevent stupid people from joining Anonymous? Or has the Anonymous letter itself been hacked?