There were many short science fiction stories I read in my misguided youth, like Van Vogt’s Dormant, that left a lasting impression.

Promise Them Anything, by Dean McLaughlin, is a delightful “first contact” story. Impeccably polite aliens arrive and tell the United Nations that they’d like us to vacate their property, for it was them who created the Earth and they are now here to mine it. The protagonists, who are diplomats, successfully explain to the aliens that humanity does not have the ability to remove itself from its planet of birth, as it lacks the know-how and the technology. The aliens, ever polite, respond by installing a supercomputer that contains all their collective knowledge, then they leave. Subsequently, not all the protagonists live long enough to meet the aliens again (some were too old already) but several of them are still alive a thousand years later when the aliens show up again… but they never come closer to the center of humanity’s growing interstellar empire than tau Ceti.

Another great story was Evensong by Lester Del Ray. It is about an individual being chased by a relentless opponent that wishes to imprison him. The chase takes them to a planet that the fugitive recognizes as the place where it all began. Ultimately, the Usurper corners him; there is no escape. “But why?” asks the fugitive, “I am God!” – “I know,” replies his pursuer. “But I am Man. Come!” 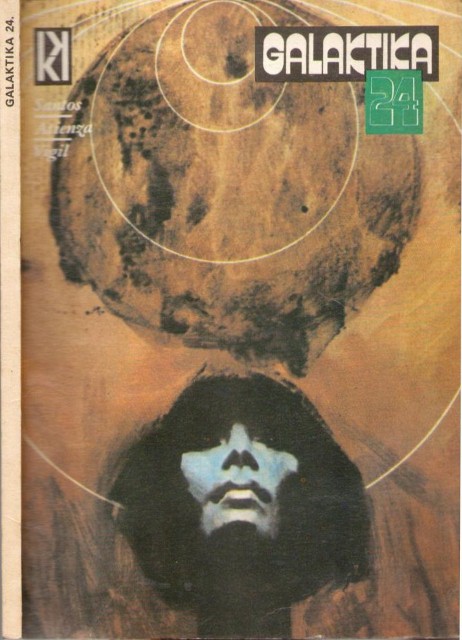 Finally, Hungary once had a world-class science fiction anthology, Galaktika. Volume 24 of this anthology was dedicated to Spanish science-fiction. In it, I read a story attributed to a “J. M. Lois”, titled Anticuerpos (Antibodies). (I can’t find anything about a writer by this name online.) It is about a time-traveling lifeboat of sorts on an otherwise barren planet that we soon recognize as future Earth. The protagonists were sent forward billions of years to find out why humanity was set to die out just after its greatest triumph: defeat of a cosmic danger that threatened the existence of the entire universe. Slowly we learn the answer: humanity was the universe’s response much as a biological organism produces antibodies to fight off disease. When the antibodies are no longer needed, they wither away. And indeed, the technological marvel of that temporal lifeboat lives on as a bright point of artificial light for a little longer… but the planet on which it is positioned is now truly lifeless.

I don’t read science fiction stories that much anymore. I’d like to think that it’s not because I am older, but because the Golden Age of Science Fiction is no more, and great stories like these just don’t get written that much anymore.