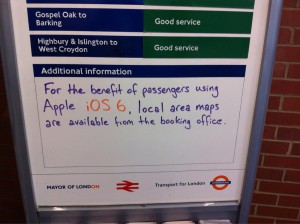 I admit I, too, joined the happy chorus of Android phone owners ridiculing Apple’s decision to drop Google Maps in favor of a half-baked homegrown Apple solution in iOS6.

However, those bad maps are no joke. Apparently in Australia, several people found themselves in life-threatening situations when Apple’s mapping program guided them to a snake-infested desert instead of a tourist destination.