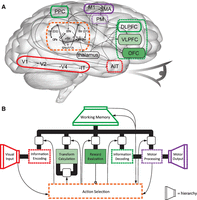 I am reading about this “artificial brain” story that has been in the news lately, about a Waterloo team that constructed a software model, Spaun, of a human-like brain with several million neurons.

Granted, several million is not the same as a hundred billion or so neurons that are in a real human brain, but what they have done still appears to be an impressive result.

I’ve spent a little bit of time trying to digest their papers and Web site. It appears that a core component of their effort is Nengo, a neural simulator. Now the idea of simulating neurons has been at the core of cybernetics for (at least) 60 years, but Nengo adds a new element: its ability to “solve” a neural network and determine the optimal connection weights for a given network to achieve its desired function.

The “brain”, then, is a particular Nengo simulation that is designed to model specific areas and functions of the human brain. Their simulation, equipped with a simple 28×28 pixel “eye” and a simulated “arm” with which to draw, can perform some simple activities such as reading and copying some digits and symbols, or memorizing a list.

I am still trying to make up my mind as to whether this result is just a gimmick like Grey Walter’s infamous cybernetic tortoise or a genuine leap forward, but I am leaning towards the latter. Unlike the tortoise, which just superficially mimicked some behavior, Spaun is a genuine attempt to create a machine that actually mimics the functioning of a human brain. Indeed, if this research is scalable, it may mark a milestone that would eventually lead to the ability to create electronic backups of ourselves. Now whether or not that is a Good Thing is debatable of course.